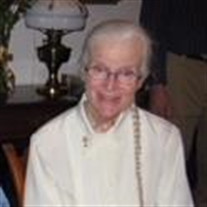 Agnes Mercedes Green Cammack passed away peacefully, surrounded by her family, on Monday, July 30, 2018. She was 83 years old. Agnes was born to Phillip and Dolores Green of Washington, D.C. on September 24, 1934. She spent a joyful childhood growing up in the Brookland neighborhood of Washington, D.C. together with her eleven brothers and sisters. Agnes was a standout student and athlete, excelling in basketball, softball, tennis and track. Due to her outstanding ability she trained with the men’s track team at Catholic University and was noted in newspapers to be the ‘next’ Babe Didrikson (track and field gold medalist in the 1932 Olympics). In 1954 she won the Washington, D.C. championship for tennis. Agnes attended Dunbarton College of the Holy Cross in Washington, D.C. for one year, then, in 1955 she joined the Missionary Sisters of Our Lady of Africa. Although she did not profess her final vows, she completed a two-year novitiate, then served as a missionary in Tanganyika (modern day Tanzania) for the next six years. Upon returning to the United States in 1963 she taught at St. John’s Elementary School in Chillum, Maryland. On November 27, 1964 Agnes was married to Thomas Carbery Cammack of Washington, D.C. Soon thereafter they moved to the Cammack Farm in Leesburg, Virginia, where they raised their four children. Agnes was a member of Saint John the Apostle Catholic Church in Leesburg. She deeply loved her Catholic faith and served the church in any way she could. For over twenty-five years she taught as a catechist, sang on the choir, cleaned altar linens, volunteered at the local nursing home, and generally served those in need. She also was an active volunteer at Birthright of Loudoun County for thirty-five years, and a stalwart at the annual March for Life. Agnes was strongly connected to her family roots and friends. For over forty years she hosted the annual ‘Green Family Picnic’ at the Cammack Farm. She was also noted for annually sending hundreds of Christmas cards, each with a very personal hand-written message. Agnes was a wonderful wife and mother whose kindness and joy was an inspiration to all who knew her. She is survived by her brother Michael K. Green, her sister Dolores G. Milmoe, her four children, Thomas J. Cammack, Martha L. Cammack, William D. Cammack and Mary C. Rice, her daughter-in-law, Florence C. Cammack, and son-in-law, James P. Rice, and her six grand-children William J. Cammack, Agnes M. Cammack, Maria T. Rice, John F. Rice, Matthew T. Rice, and Katherine R. Rice. The family will receive friends from 6:00 PM to 8:00 PM on Wednesday, August 8, 2018 at the Loudoun Funeral Chapel, 158 Catoctin Circle, SE, Leesburg, Virginia. The funeral service will be at 2:00 PM on Thursday, August 9, 2018 at St. John the Apostle Catholic Church located at 101 Oak Crest Manor Drive, Leesburg, Virginia 20176 with the Rev. William P. Saunders officiating. Interment will be in St. John’s Catholic Church Cemetery, Leesburg, VA. In lieu of flowers donations may be made to Birthright of Leesburg, 823 South King Street, Suite 1, Leesburg, VA 20175, or to Saint Dominic’s Monastery, 2636 Monastery Road, Linden, VA 22642. Online condolences may be made to the family at www.loudounfuneralchapel.com.

Agnes Mercedes Green Cammack passed away peacefully, surrounded by her family, on Monday, July 30, 2018. She was 83 years old. Agnes was born to Phillip and Dolores Green of Washington, D.C. on September 24, 1934. She spent a joyful childhood... View Obituary & Service Information

The family of Agnes Mercedes Green Cammack created this Life Tributes page to make it easy to share your memories.

Send flowers to the Cammack family.