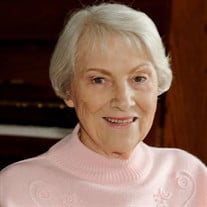 Alise was known to her friends as Lee. She was born on December 6, 1927 and after 92 years filled with adventure, passed away on September 6, 2020. We’re grateful that she went without suffering, and thankful that she had such a long and full life. Lee is survived by her daughters, Sharon and Sue (Tom) and her granddaughters, Beth, Allie (Jason), Megan (Doug), and Lindsay. She was lucky to have five beautiful great grandchildren, Ollie, Brandon, Emi, Thomas, and Olivia. She was quite the character and had a great sense of humor. She loved to write and to tell stories. She was born in Richmond less than 2 years before the stock market crash, and raised in Bowie, MD. She’d tell stories of getting by just fine because of their garden and chickens and we think she was impressed with her mother’s skills (corn one night, lima beans the next night and on the third night SUCCOTASH! We heard about that every time we had corn or limas. She graduated high school in 1944 at the age of 16 and got a job in DC at the interior department. She was young in the epicenter of homeland action during the big war. Once when she was taking dictation from one of the younger lawyers who was known for being “fresh”, he put his hand on her knee while he was talking to her. She said she knew he was seeing what kind of reaction he’d get from her so she said “I will give you exactly one hour to get your hand off my knee” and cracked up as she talked about his face before he started laughing. She danced her nights away at the USO, supporting the war effort by giving her address to lonely soldiers shipping out. We know she was a patriot by the number of treasured letters that are still in the family from different soldiers. One soldier named Quentin got her to settle down though, and when asked what made her fall in love with him, she said that she got tired of coming up with excuses for why he shouldn’t come visit her in Maryland and figured if she married him maybe she could quit thinking of answers. After over 30 years of marriage, Lee and Quentin had grown apart and parted amicably. She met and fell in love with George, a cowboy from South Dakota, who was a computer programmer for the Bureau of Naval Personnel. They bought a farm in Winchester, VA and raised black angus cattle. She was predeceased by both Quentin and George and will be laid to rest between the two of them. Donations in Lee’s memory can be made to: JDRF https://www2.jdrf.org/site/Donation2?2374.donation=form1&df_id=2374&s_src=FDRS-FY21-PRMY-SL_MEM-google_cpc&s_subrc=78594578386-jdrf-e-409151902254&gclid=CjwKCAjw19z6BRAYEiwAmo64LXJ0ysvE2n3BmVOAV4cdI-LCujr-PJoL5RWCFcSkyLjaVBEaCdKikxoCrJoQAvD_BwE Ashburn Volunteer Fire and Rescue Department https://donatenow.networkforgood.org/ashburnfirerescue/ or Glaucoma Research Foundation https://getinvolved.glaucoma.org/tribute-giving There will be a private graveside service for the family at a later date.

Alise was known to her friends as Lee. She was born on December 6, 1927 and after 92 years filled with adventure, passed away on September 6, 2020. We&#8217;re grateful that she went without suffering, and thankful that she had such a long... View Obituary & Service Information

The family of Alise Ruth Holben created this Life Tributes page to make it easy to share your memories.

Alise was known to her friends as Lee. She was born on December...

Send flowers to the Holben family.