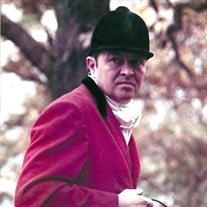 Allen Kenneth Shreve, Jr., 74, of Leesburg, VA, passed on Friday, January 28, 2022. Born March 9, 1947 in Arlington, VA; Ken was a son of the late Allen K. Shreve and the late Laura Howard Shreve. Owner and operator of Maintree Farm in Leesburg, VA. A licensed race horse trainer, in WV, PA, DE, and MD. He also trained fox hunters, jumpers and steeplechasers. Throughout his life, Ken was honored for many awards including his first blue ribbon at the age of 18 months old. He began fox hunting at the age of 6; he won Steeple Chase and Point to Point races in VA. He was a riding instructor and trainer for 40 years. He was also a life long member and Master of the Loudoun Hunt and a member Leesburg Moose Lodge. Ken’s hobbies included cooking, reading and most of all he enjoyed traveling with his wife Sue. He was predeceased by his beloved wife Susan Dorie Shreve in 2016; siblings, Laura Lee Newman, and brother-in- law, Wallace Newman. Ken leaves his family to cherish his memory including, his son Allen Kenneth “Kenny” Shreve, III of Leesburg; his sister, Cindy Shreve of Leesburg; grandsons AK and Ethan Shreve of Leesburg; his dog and constant, faithful companion, Dorie; as well as other family and friends. The family will receive friends for a visitation on Monday, February 7, 2022 from 6 to 8 pm at the Loudoun Funeral Chapel, 158 Catoctin Circle, SE, Leesburg, VA 20175. Funeral services will begin at 1 pm on Tuesday, February 8, 2022 at 1 pm at the funeral home. Interment will follow in Union Cemetery, Leesburg, VA; where Ken will be laid to rest with his beloved wife. Honorary pall bearers will be Richard Casey, Blair Howard, Tommy Lee Jones, Allen K. Shreve, IV, Ethan Matthew Shreve, and Leonard Bowie. In lieu of flowers, the family request donations may be made to the Humane Society of Loudoun County. Donations may be made by check payable to the County of Loudoun with "Animal Program Trust Fund" in the memo line. The Animal Program Trust Fund is used to purchase supplies that directly benefit the pets that are not provided for in the government operating budget.

The family of Allen Kenneth Shreve Jr. created this Life Tributes page to make it easy to share your memories.

Send flowers to the Shreve family.