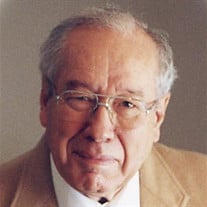 Alvin Moore, 94, of Leesburg, Virginia, died Thursday, September 20, 2018, surrounded by his three sons. Alvin was born on February 19, 1924, in Rocky Mount, North Carolina, the youngest of five children born to John Henry Moore and Mary Eva Epps. In high school, he became an Eagle Scout and was a member of the Order of the Arrow. He enlisted in the U.S. Navy in 1942 and earned several medals during his 29 years of service: Navy Commendation Medal with Gold Star, National Defense Service Medal, Navy Occupation Medal, WWII Victory Medal, American Campaign Medal, and Meritorious Service Medal. Having advanced to Captain, he retired from the Navy in 1971 and joined Thompson & Greenspon, of Fairfax, Virginia, as an accountant. He worked there for 18 years, making partner. Throughout his career and while earning his bachelor’s degree from George Washington University, he always had the support of the love of his life, Lucy Virginia Hicks Moore. Alvin and Ginny married on July 17, 1944, and were wed 65 years until her passing in 2012. Alvin was a devoted Christian and long-time member of the Leesburg United Methodist Church. He was also a member of the local Lions Club. Beloved by the many who knew him, Alvin is survived by his sons Ronald Moore, MD and daughter-in-law Allee Humphrey of New Bern, North Carolina; James Moore and daughter-in-law Sue Symons of Charlottesville, Virginia; and Bruce Moore and daughter-in-law Irene Moore of Manassas, Virginia. He also leaves five grandchildren, six great-grandchildren, one nephew, and several devoted caregivers, including Roxanne Warner and Laurel Mennen. A memorial service to celebrate Alvin’s life will be held Saturday, September 29, 2018, at 11 a.m. at Leesburg United Methodist Church, 107 W. Market St., Leesburg, VA 20176. Graveside services and interment will be held at 3pm Tuesday, October 22, 2019 at Arlington National Cemetery. In lieu of flowers and because Alvin cherished his church family, memorial donations may be made to Leesburg United Methodist Church. Please share condolences with the family at www.LoudounFuneralChapel.com.

The family of Alvin Moore created this Life Tributes page to make it easy to share your memories.

Send flowers to the Moore family.