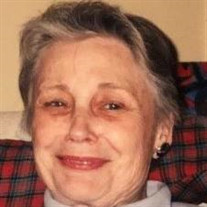 Anne Mapes Burnham, 93, of Leesburg, VA passed away Saturday, January 4, 2020. Born September 22, 1926 in Shiner, Texas, she was the daughter of the late Patrick S. Mapes and Marie Remy Mapes. Anne was the beloved wife of Stanley E. Burnham for 64 years, until his death in July, 2010. They met while he was in the Air Force, stationed in San Angelo. They lived in many parts of the country, both while Stan was in the service and later when they relocated a number of times due to Stan’s job transfers. Anne and Stan moved to Charleston, SC upon retirement and later to Leesburg, VA. Anne’s greatest joy was spending time with her family and she devoted many years to raising her children. In addition, she volunteered with the hospital auxiliary, school library, food bank, and as an ombudsman for the elderly. She also enjoyed gardening, playing bridge, dancing, traveling, and going to the beach. Left to cherish a lifetime of happy memories are her children: Jennifer Kemp of Washington D.C., Jim Burnham of Winston-Salem, NC, Susan Takesian (Walter) of Needham, MA, Nancy Laranjo (Julio) of Leesburg, VA, John Burnham (Denise) of Leesburg, VA and Sarah Speer (Charles) of Oakton, VA and the late Stanley Patrick Burnham. She was the adored grandmother of Jennifer Burnham, Jackson Speer, Geoffrey Burnham, Rebecca Burnham, Anne Takesian and George Takesian. Anne was the sister of Patrick Mapes, Colleen Mapes Littman, and Jimmy Mapes, all of whom predeceased her. She is survived by her cousin, Ann Wardlaw Estes; her brother-in-law Colonel Mayer Littman and his children, Leah Littman DePriest (Mickey, and son Ryan) and Joseph Littman; as well as other cousins, nieces and nephews. Prior to his death in early December, Anne and her neighbor and close friend, Eugene Petersen, were truly a gift to each other in their later years. Arrangements by Loudoun Funeral Chapel. Memorial service and interment will be held privately. In lieu of flowers, donations may be made to the Alzheimer’s Association or to a charity of one’s choice. To share memories of Anne, please visit www.loudounfuneralchapel.com

The family of Anne M. Burnham created this Life Tributes page to make it easy to share your memories.

Send flowers to the Burnham family.