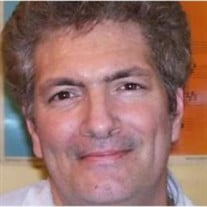 Anthony Granata was delivered into the loving arms of his Lord and Savior, Jesus Christ on May 11, 2022. After many years of struggle with COPD and heart problems, the Lord decided it was time to bring Anthony home. He was born on August 10, 1961, in New York. He was preceded in death by his father, Carl Granata. He will be deeply missed by his mother, Clorinda Granata, and his siblings, Joe Granata, John Granata, Anna Beckley, and Laura Hilly; along with his many nieces and nephews. Anthony grew up in Flushing, NY, and was the eldest of five siblings. After High School he joined the military, where he served domestically and abroad in Germany. Anthony will be remembered for his great passions, which first and foremost included his fierce love of the Lord and desire to spread the message of salvation. Those of us that were closest to him, were frequently asked if we have “read our bibles today” and if we were “secure in our faith and salvation”. He was a devoted and extremely protective son, with a special and deep love for his mother; always concerned about her well-being and beginning each day with a morning check-in call. Another great passion included his love for music, which later became his occupation. He had an entrepreneurial spirit and started several businesses. Anthony was a musician, composer, teacher, and an accomplished self-taught guitarist. He enjoyed teaching others the love of music and started his own guitar instruction school. This blossomed into a starring and directing role in a PBS program called Guitar Instruction which aired on RCTV 28 in Reston, VA in 2003. He then published an instruction book and then the first issue of Guitar Instruction Magazine in 2008. He had a gregarious personality and communicated his feelings and point of view with passion. He lived life on his own terms. Growing up in an Italian family, Anthony enjoyed eating great food, especially a traditional Italian meal. He will be greatly missed. His family takes comfort in knowing he is home with Jesus. A funeral mass will be held for Anthony at St. Theresa Catholic Church 21370 St. Theresa Lane, Ashburn, VA 20147 on Wednesday, May 18th at 10:30 am. Interment to follow at St. John the Apostle Catholic Church Cemetery in Leesburg, VA.

Anthony Granata was delivered into the loving arms of his Lord and Savior, Jesus Christ on May 11, 2022. After many years of struggle with COPD and heart problems, the Lord decided it was time to bring Anthony home. He was born on August 10,... View Obituary & Service Information

The family of Anthony Lorenzo Granata created this Life Tributes page to make it easy to share your memories.

Anthony Granata was delivered into the loving arms of his Lord...

Send flowers to the Granata family.