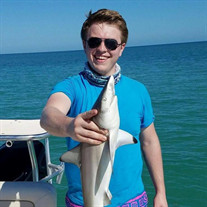 Austin Calvin Echols, 26 years old, of Lovettsville, Virginia died on August 30, 2020. He was born in Leesburg, Virginia on December 30, 1993. He was the youngest of his siblings and was full of life from his early days until his last. Austin’s compassionate, outgoing, and cheery ways were a source of smiles and goodness for anyone he met. Austin was curious and incredibly kindhearted. His kindness was truly infectious. Most of all, he loved his family dearly. Austin’s lifelong love of learning led him to spend much of his time immersed in interesting hobbies. He enjoyed raising and caring for rare coral species in his saltwater aquariums and he loved sharing his deep knowledge on the topic with others. After many tumbles and falls, Austin became an excellent long boarder. He also loved to study, scrutinize, and share his passionate knowledge and ideas about history and world events. Austin deeply cared for animals, taking in pet cats of his own and helping stray cats whenever he could. Although Austin grew up in Lovettsville, Virginia, he spent much of his free time on his grandparents’ farm in Lucketts, Virginia, where he made countless memories with his family. He graduated from Woodgrove High School in Purcellville, Virginia in the class of 2012 and he pursued some college education at Old Dominion University. He went on to work in the construction industry, a trade common to his family for several generations. He quickly moved up the ranks and into managerial roles within his company. Austin was passionate about his work and never hesitated to go the extra mile. Austin moved to Littleton, Colorado in 2019 and continued working in the construction trade. He made many new friends and countless memories on his new adventure. Austin leaves his family to cherish his memory including his mom Michele Coates (Athey) and husband Daniel Coates of Lovettsville, VA; his dad Alton Echols, III and wife Jin Guo of Charles Town, WV; his maternal grandmother, Jo Ann Athey; his paternal grandparents, Alton Echols, Jr. and Bonnie, and Ginger and Paul McDonald; his siblings, Alton Echols, IV and wife Kaitlyn, Ashton Echols, and Autumn Echols. He is also survived by 2 nieces, Summer and Darby; as well as a host of aunts, uncles, cousins, family and friends. He was preceded in death by his maternal grandfather, James Athey. The family will receive friends on Friday, September 11, 2020 from 10 to 11 am at the Loudoun Funeral Chapel, 158 Catoctin Circle, SE, Leesburg, VA 20175. Interment will follow at Furnace Mountain Cemetery, Leesburg, VA. In lieu of flowers, memorial donations may be made in Austin’s memory to the Coral Reef Alliance (an organization that works to save coral reefs around the world). Arrangements by Loudoun Funeral Chapel.com

Austin Calvin Echols, 26 years old, of Lovettsville, Virginia died on August 30, 2020. He was born in Leesburg, Virginia on December 30, 1993. He was the youngest of his siblings and was full of life from his early days until his last. Austin&#8217;s compassionate,... View Obituary & Service Information

The family of Austin Calvin Echols created this Life Tributes page to make it easy to share your memories.

Send flowers to the Echols family.