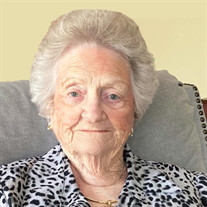 Barbara Cannon Kaylor passed away peacefully on January 6, 2022 at her home in Leesburg, Virginia. She was born in Grafton, Taylor County, West, Virginia, on Christmas Eve 1932, the sixth child of William Patrick & Mary Grinnan Cannon. Barbara attended & graduated from Rowlesburg High School in Rowlesburg, West Virginia. After graduation she met & married Robert Kaylor, Sr. Their marriage took place at Saint Philomena’s Catholic Church in Rowlesburg, West Virginia. Soon after she and Robert were married, they moved to Loudoun County, Virginia and started their family. They built their home in Prospect Hills, in Leesburg, more than 60 years ago. During those years, Barbara worked for Woodward and Lothrop at Seven Corners, C&P Telephone Company and for several doctors in Leesburg, while raising their family of 5 children. She and Robert were married for 44 years. Barbara volunteered with PTA, LARC, the Loudoun Women’s Club, and St John’s Catholic Church of Leesburg. One of the volunteer projects closest to her heart was the bond issue and her volunteer work on the Leesburg Senior Center, at North Street. Together with her committee, they walked in parades, collected signatures and supported a bond issue to get the funds needed for the building’s rehab. She and her committee worked with the town and architect to give input during the restructuring of the former school building (where 3 of her 5 children had attended elementary school). Barbara is survived by her daughter, Theresa Kaylor Whitcomb of Round Hill, Michael & Diane Kaylor of Annandale, Robert Kaylor, Jr of Sterling, and Joseph Kaylor and Grace of Berryville. She was predeceased by her husband Robert Kaylor, Sr and her daughter Mary Kaylor Hurst. She is also survived by her grandson Sean Whitcomb & Shannon, granddaughter Erin Whitcomb, grandson Patrick Kaylor & Joanna, grandson Douglas Kaylor & Ashley, granddaughter Katie Wilson & Jason, granddaughter Morgan Kaylor, and grandson Zach Kaylor & Kaitlyn, great grandson Jackson Kaylor and great granddaughter Cora Kaylor. Also surviving are her brothers Michael Cannon & Eleanor of Ridgley, West Virginia and brother James Cannon & Betty of Charlottesville, Virginia, as well as many nieces, nephews and friends, including her wonderful caregiver Evelyn Townsend. A funeral mass will be held on Tuesday, January 18, 2022 at St. John the Apostle Catholic Church, 101 Oak Crest Manor Drive, Leesburg, VA, with Father John Mosimann officiating. The service will begin at 1:30pm. Interment will follow in the church cemetery..

The family of Barbara Ann Cannon Kaylor created this Life Tributes page to make it easy to share your memories.

Send flowers to the Kaylor family.