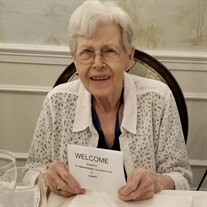 Barbara Roark, 90, of Sterling, VA, beloved wife, mother, grand- and great-grandmother, passed away on Wednesday January 15, 2020 after a short illness. Barbara was born on August 20, 1929, the only child of Thelbert L. and Sophia (Vossloh) Weybrew. She grew up in Pittsburgh where her father was an engineer for Westinghouse Electric Corporation. After high school, Barbara attended Allegheny College (Meadville, PA) where she met the love of her life, George W. Roark, Jr. They were married in 1949, and celebrated their 70th anniversary on February 5, 2019 with family and friends. She and George settled in the Washington, DC area and raised four children -- Randy, Robin, Kristi, and Kitty -- who grew up largely in Bethesda, MD as George completed his postgraduate training and began to practice psychiatry. Barbara, her family, and dear friends spent many happy summers at their beach house in Bethany Beach, DE where they enjoyed cracking crabs and playing badminton. In the early 1970s, Barbara took courses in computer programming and owned one of the first PCs, a Radio Shack TRS-80. She worked for a time as a computer specialist for CONCERN, Inc., a national nonprofit environmental education organization in Washington, DC. Barbara enjoyed needlework: sewing, cross-stitch, needlepoint, and knitting and created many pieces cherished by family and friends. She was a fan of the Washington Nationals and Redskins, a crossword puzzle wizard, an active investment club member, played bridge regularly, and loved many pets over her lifetime, including her dachshund Kaiser and her cat Guy. Barbara and George retired to their dream home on the golf course of the Swan Point community in Issue, MD for many happy years where they loved to golf, garden, and birdwatch. They enjoyed traveling around the world and especially to St. Maarten in the Caribbean where they spent several weeks every winter. In the early 2000s, they moved to a home in the Heritage Hunt community in Gainesville, VA. They joined the Falcons Landing Military Life Plan Community (CCRC) in 2009 where they made many wonderful new friends. Barbara is survived by her husband, Dr. George W. Roark, Jr., son George (Randy) Randall Roark (Marlene) of Silver Spring, MD, son Robin Roark (Lyn) of Derwood, MD, daughter Kristi Hobby (Rick) of Calabash, NC, and daughter Kathryn (Kitty) Smith (Kevin) of Concord, MA. She is also survived by grandchildren Jessica Dascenzo (Paul), Greg Siegel (Julie), Colin and Bethany Smith, and Gillian Roark, as well as three great-grandchildren, Tyler and Ryan Dascenzo and Riley Siegel. Arrangements have been made for a memorial service in the ballroom of the Falcon’s Landing Military Life Plan Community on Monday, January 27th at 2 p.m. Private interment at Bradley Hills Presbyterian Church, Bethesda, MD. In lieu of flowers, contributions may be made to Australian bushfire recovery: https://www.redcross.org.au/support-us/donate-funds/in-memory or to Saint Jude’s Hospital for Children: https://www.stjude.org/donate/ .

Barbara Roark, 90, of Sterling, VA, beloved wife, mother, grand- and great-grandmother, passed away on Wednesday January 15, 2020 after a short illness. Barbara was born on August 20, 1929, the only child of Thelbert L. and Sophia (Vossloh)... View Obituary & Service Information

The family of Barbara W. Roark created this Life Tributes page to make it easy to share your memories.

Send flowers to the Roark family.