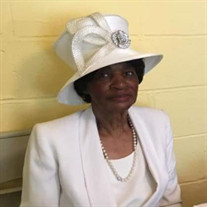 Bernice was called home to glory on April 29, 2020 at Potomac Falls Rehab Center in Sterling, VA. Bernice was born March 24, 1934 in Leesburg, VA to the late Makel and Sarah Turner Thornton. She was 86 years old. Bernice and her twin Bernard... View Obituary & Service Information

The family of Bernice Allene Scott created this Life Tributes page to make it easy to share your memories.

Send flowers to the Scott family.