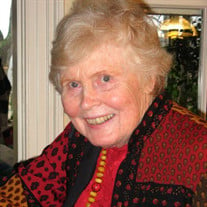 Betsey Jean Smith Brown of Leesburg, Virginia died on Monday, July 29, 2019, at home with her family present. She was 89 years old. She is survived by her four children, ten grandchildren and two great-grandchildren. Born Thursday, October 24, 1929 in Lake Wood, Ohio, she was the daughter of the late Morris Smith and the late Harriet Richards Smith. She and her late husband, Henry “Harry” Bedinger Rust Brown, lived at Rockland, his family farm for over 200 years, since 1985. Betsey graduated from Syracuse University, Phi Beta Kappa in 1950 where she served as President of the female student body and was a member of the Gamma Phi Beta Sorority. She received her Masters in Education from Teachers College at Columbia University and her Doctorate in Counseling Psychology from Rutgers in 1977. Betsey lived in Westfield, NJ from 1954 – 1985 where she was a Founder and Director of EVE (Education, Vocation, Employment), a community life-planning center and worked as a licensed clinical psychologist in private practice. Betsey always considered herself a steward of Rockland and the surrounding rural area. Upon moving to Rockland, she restored and expanded the gardens and opened Rockland to the public for the Garden Club of Virginia’s Historic Garden Week tour in 1999 and 2017. In addition, Harry and Betsey hosted innumerable community, club and civic gatherings as Rockland. They placed the house on the National Register of Historic Places and have maintained the farm's 500+ acres in agricultural uses, supported by the Rockland Agricultural District which they established with Loudoun County. Betsey was elected to serve on the Loudoun County Board of Supervisors, representing the Catoctin Magisterial District. She worked tirelessly for intelligent development policies and green space throughout the County. She also started a community action group called Friends of Route 15, or FOR 15, in an effort to find intelligent solutions for the heavily traveled 2 lane road. This group, over time, morphed into the Catoctin Coalition which is still active in the Route 15 corridor. She and Harry lent financial support to the establishment of the Catoctin Rural Historic District, an area of 25,000 acres recognized by the Virginia Department of Historic Resources for its picturesque farmland, architectural significance and agricultural history. Betsey was a long-time member of the Leesburg Garden Club and the Fauquier-Loudoun Garden Club. She served as President of the Leesburg Garden Club from 1996 – 1998. From 2001 to 2005 she worked on land use issues while serving as Vice Chairman on the National Affairs and Legislation Committee of the Garden Club of America. She was honored in December of 2014 with a certificate for her 25 years of outstanding commitment to serving the Garden Club of America, the Fauquier Loudoun Garden Club and her community. Betsey was also a former member of 100 Women Strong, a philanthropic organization formed to enhance the community of Loudoun County and the lives of its residents through grant donations. Since Betsey was 5 years old, she had always wanted to write a book. On her 85th birthday, she published a non-fiction children’s book entitled, America’s First Panda which was dedicated to her dear friend, Mrs. James Symington (“A. V. Symington”) of Temple Hall. It was A. V.’s father, Hayden Harris, who gave the panda a home at the Brookfield Zoo in Chicago. Through all her hard work and efforts, Betsey made many, many good friendships that she valued above and beyond her accomplishments. She always said her friendships and her family were the most important things in her life and gave her the most happiness. A Memorial Service and reception will be held on Sunday, August 4th at 4:00PM at Rockland, 16306 Rockland Lane, Leesburg, VA 20176. In lieu of flowers, donations may be made to Capital Caring Hospice or the Journey Though Hallowed Ground. Online condolences may be made to the family at www.loudounfuneralchapel.com

Betsey Jean Smith Brown of Leesburg, Virginia died on Monday, July 29, 2019, at home with her family present. She was 89 years old. She is survived by her four children, ten grandchildren and two great-grandchildren. Born Thursday, October... View Obituary & Service Information

The family of Betsey J. S. Brown created this Life Tributes page to make it easy to share your memories.