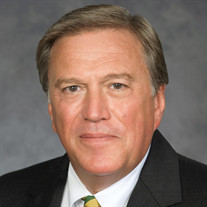 Bruce Bernard Auger, of Ashburn, VA, a proud Marine, lost his eight yearlong battle with multiple myeloma on June 17, 2019. Bruce was born on February 3, 1951 to Louis George and Cecile (nee LaRocque) Auger (both now deceased). He is survived by his wife of 37 years, Janet (nee Edmunds), their children, Bruce Brooks Auger and his wife, Gabriela Auger of Leesburg, VA; Caitlin A. Miller and her husband, Steve Miller and their daughters Camille and Brynn of Leesburg, VA; and Austin L. Auger of Washington, D.C.; his brothers, Paul Auger and his wife, Mary of Lakewood Ranch, FL and Brian Auger and his wife, Cheri, of Columbia, MD; and his mother-in-law, Marilyn K. Edmunds (nee Kirkham) of Irvington, VA. Bruce grew up in a Navy family settling in Glen Burnie, Maryland where he graduated high school in 1968. At the age of 17, with his parents’ reluctant permission, he voluntarily enlisted in the U.S. Marine Corps and proudly and honorably served in Vietnam. Returning to civilian life, he graduated from Towson State College in 1975 and 23 years later obtained his MBA from William & Mary’s Raymond A. Mason School of Business. Bruce spent his professional life in the construction industry where he served as an executive for many prominent commercial construction companies in the Washington, D.C. metro area, most recently as Division VP and Business Unit Leader of Balfour Beatty Construction. His most rewarding and enjoyable time was as President & CEO of AUGER Construction, Inc. where he worked side-by-side with Janet. Bruce was active in the Associated Builders and Contractors of Washington, D.C., a Board member of Bankshares 2000 Inc. (since acquired by Fulton Financial), and a Board member of The College of William & Mary – Mason School of Business Foundation where he co-chaired the Building Committee of Alan B. Miller Hall. Ever active in his children’s lives, Bruce coached their sports as well as documented their achievements with oh so many videos and photographs. Bruce loved khaki pants, coffee makers, sunglasses, country music, boating, puns and wristwatches. To honor his quirky sense of humor, his children ask that the next time you are offered dessert by a restaurant server, please reply: “No, thanks. I’m driving.” Memorial contributions may be made to The Multiple Myeloma Research Foundation (themmrf.org) or to Capital Caring (www.capitalcaring.org). Services to be held at a later date at Arlington National Cemetery.

The family of Bruce Bernard Auger created this Life Tributes page to make it easy to share your memories.

Send flowers to the Auger family.