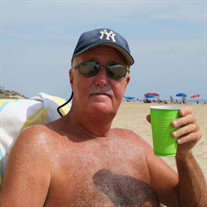 “Butch” Ralph G. Fletcher, 75 of Leesburg, VA, passed away suddenly following complications of heart surgery on Wednesday, February 3, 2021. Butch was a son of the late Howard & Genevieve Fletcher, of Hamilton, VA. He was born on October 7, 1945 in, Leesburg, Virginia; and was a lifelong Loudoun County boy. He was a graduate of Loudoun Valley High School; and was a star athlete. His first love was baseball; where his pitching skills were well known. He was devoted to youth sports in Loudoun County, by coaching many teams, including baseball and basketball. During his years of coaching, he was happiest heading off to be with his boys for practices and games. His love for his players was legendary. Butch was an avid fundraiser for all youth sports’ and for the handicapped; raising funds for equipment or even home adjustments needed. As owner of Leesburg Village Lanes, he and Pat organized many bowling events, bake sales and other activities to assist with purchasing new equipment and uniforms. Butch was a Jack of all trades; as co-owner of Johnson’s House of Beef in the 1980’s, the Leesburg Antique Center, and the Village Restaurant. In his later years, he enjoyed many successful years in the car business; working for Jerrys Chevrolet, and Star Buick, GMC. One of Butch’s sweetest qualities was how he loved people and his ability to listen to and share with them. He was a devoted friend and cherished neighbor where ever he lived. Those who knew him well, nicknamed him the Mayor of Leesburg. There are No words to express the profound love for his family and closest friends. His wife, children, and grandchildren, were his heart and soul. As a devoted husband, Dad, and Papa. His grandbabies affectionately called him Chewbacca because of his fuzzy chest. He was so proud of his grandchildren and blessed to welcome all 12 of them. The love that he and Pat shared was apparent to all who knew them. They were sweethearts, soulmates and the dearest of friends. He leaves his family to cherish their happiest memories of him, including his devoted wife Pat Fletcher; 5 children and 12 grandchildren. They are Ralph G. Fletcher of Leesburg VA, Heather Campbell and her children Ashleigh and Ella Wager of Arlington VA, Erin Hornbeck and her husband Brian Hornbeck and their children Ben, Will and Bronwyn of Ashburn VA, Holly Jackson and her husband Mike Jackson and their children Katie and Andrew of Tampa Fl and Ryan Campbell and his wife Lucy Campbell and their children James, Lydia, Jack, George and Sam, of Leesburg VA. Butch also leaves a brother, Gerald Fletcher of Berryville, and a sister, Cheryl Fletcher Marshall of Fredericksburg, VA. He was predeceased by a sister’s, Bonnie Reed of Hamilton, Janet Baker and one brother, Buck Fletcher of Hamilton. The many years his family shared with him have been a special gift to them all. Especially times spent at the Outer Banks, will help keep them strong in the months ahead. They take great comfort in knowing he is at peace with his Lord and is watching over them all. “Until we meet again; We love you to the moon and back Papa!!” A celebration of Butch’s life will be delayed until the spring when all can gather without COVID restrictions. In lieu of flowers, donations may be made in his memory to the charity of your choice or to: St. Jude’s Children’s Research Hospital, the Wounded Warrior Project, or the Loudoun youth Sports Leagues. Please share condolences with the family www.LoudounFuneralChapel.com.

&#8220;Butch&#8221; Ralph G. Fletcher, 75 of Leesburg, VA, passed away suddenly following complications of heart surgery on Wednesday, February 3, 2021. Butch was a son of the late Howard & Genevieve Fletcher, of Hamilton, VA. He was born on... View Obituary & Service Information

The family of "Butch" Ralph G. Fletcher created this Life Tributes page to make it easy to share your memories.

Send flowers to the Fletcher family.