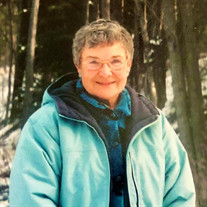 Carleen Francis Dodson, 87, died Tuesday, December 15, 2020 at her assisted living home from a long battle with Alzheimer’s disease. She leaves her sons Jeff and Jon; daughter-in-law Nancy; granddaughter Jamie; great granddaughter Danielle; and many close friends. Carleen was predeceased by her husband of 60 years, James (Jim) Morger Dodson who passed away on October 30, 2015; her mother, Rose; her father, Carl; step father, Elmer Derr; her older sister, Gwen Rose Stewart; brother-in-law, Keith Stewart; and grandson, Jared Dodson. Born and raised in Lyman, Nebraska, the daughter of Rose and Carl Zimmerer, she was the youngest of two daughters. She and her family moved to Fort Collins, CO during her early years. After completing high school in Fort Collins, she attended Colorado A&M (now Colorado State University) and graduated with a degree in education. After graduation, she married her high school sweetheart, Jim, on June 12, 1955 who was commissioned an ensign with the US Navy. They moved to Fallon, NV for two years with the Navy. For their next Navy assignment, she relocated with Jim to San Jose, California, where both of her sons were born. In 1964, she and the family moved to Golden Valley, MN where she resided until 1980. Their dreams came true in 1980 when they built a home on Lake Independence, living there until 1999. Carleen and Jim then lived in Waconia, MN until 2015 when they moved a final time to Paeonian Springs, VA near their son, Jeff, and his family. Carleen was an educator and teacher for over 30 years teaching elementary school age. Most of her career was spent with the Good Shepard Catholic School in Golden Valley, MN. She also worked as a teacher with Holy Name of Jesus in Medina, MN. She was an amazing baker and enjoyed cooking for her family and friends. Her holiday recipes have passed through the generations and as her sons and granddaughter approach Christmas this year with the family traditions, she will still have a special place in the kitchen. She enjoyed the outdoors, taking long walks through the Minnesota Landscape Arboretum near her home. She especially enjoyed bird watching and spending time on the lake. Carleen spent many hours fishing with her children and grandchildren. She was known for her kindness; devotion to family and friends; her passion for teaching her students and her desire to help others. She shared deep and enduring friendships throughout her life. She will be missed by us all, but never forgotten. A private service will be held at Union cemetery in Leesburg, VA where she will be laid to rest at the family plot with her husband, Jim, and next to her grandson, Jared. In lieu of flowers, the family asks that donations be offered to the Alzheimer’s Association in Carleen’s name.

The family of Carleen Francis Dodson created this Life Tributes page to make it easy to share your memories.

Send flowers to the Dodson family.