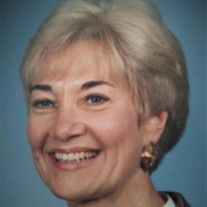 Carolyn Olney Bousman, 81 of Leesburg, Va passed away after a long illness on Monday, July 19, 2021. She was born on May 25, 1940 in Washington, DC to Elbert Young Olney and Helen Rose Aarons. Survivors include Brent and Joan Bousman, Scott and Marcey B Patton, and Kevin Bousman; she was Memaw to three grandchildren Eliott Hahn and Sallie Louise Sledd, and William Bousman; cousin Sandra Upfold and sister in law Lynne Griggs (Bob). Carolyn graduated from Washington & Lee High School in 1958 as a straight A student before heading off to Mary Washington College. During school breaks, she performed runway modeling for department stores. In 1959, Carolyn married Robert Louis Bousman which began their 61 years of love and dedication. As her children grew, she completed her Associates Degree in Business Administration while working for General Electric, then Lockheed Martin as an analyst. Finally, she worked under top government clearance for the intelligence community (known at home as Secret Agent Mom). Once retired, after 25 years of service, she was a preschool teacher at Harmony Church in Hamilton where she hoped to make a positive impact on the next generation. Carolyn was a devoted wife and mother, with superior patience skills. She was known to her family, friends, neighbors, coworkers, and community as a warm, kind, and compassionate lady. She was an incredible Mewmaw to her grandchildren hosting numerous weekend and weeklong family camps at “Orange & Blue Hollow”. In her Hamilton/Purcellville community, she was a member and past Deacon of the Presbyterian Church, an avid reader in her book club, and participated in a Red Hat Society. She loved to garden, sew, and try new recipes while entertaining family and friends. In her spare time, she was found beaching on Hilton Head Island, traveling the USA with Bob, and attending UVA sports games as well as many Wahoo social events. She always cheered for Nationals baseball and took partial credit for the World Series win. She will be sorely missed by all who knew her sunshine. Important Notation: Memorial Services will be joined for Robert and Carolyn Bousman this Friday, July 23rd at 2:00 pm @Loudoun Funeral Chapel. Private family burial to follow. Special thanks to the physicians and staff at the NIH who treated Carolyn with kindness and respect along this ten year journey. She’s was dedicated to helping find a cure for MAC pneumonia.

Carolyn Olney Bousman, 81 of Leesburg, Va passed away after a long illness on Monday, July 19, 2021. She was born on May 25, 1940 in Washington, DC to Elbert Young Olney and Helen Rose Aarons. Survivors include Brent and Joan Bousman, Scott... View Obituary & Service Information

The family of Carolyn Olney Bousman created this Life Tributes page to make it easy to share your memories.

Carolyn Olney Bousman, 81 of Leesburg, Va passed away after a...

Send flowers to the Bousman family.