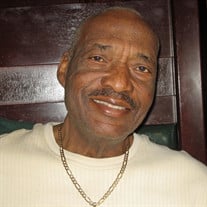 Charles Dickerson, Jr. was granted his wings on October 6, 2019. His final days were spent surrounded by his loving family. Charles Dickerson, Jr. was born July 16, 1928 in St. Louis, Missouri to the late Charles, Sr. and Mable Dickerson. He was the second eldest son of 8 siblings. At the young age of 16 he joined the Navy serving in World War II. After his service in the Navy, he enrolled in Tennessee State University Architectural College where he met his first wife, Linnetta Brown. They had two daughters, Juanita and Deborah. Using his Architectural training, he built several homes. He married Sandra Haney and had two daughters, Charlene and Deniene. After living in several cities, he eventually settled in Miami, FL. He married again to Martha Wittenberg. He later shared many years with long-time friend Johnnie Smith. While in Miami, he started his cement business, Gibraltar Concrete. He had a strong work ethic and dedication to his business. His construction legacy includes pouring the cement for the Miami Dolphin Stadium, The Mayfair Mall in Coconut Grove, FL, as well all the Southern stations for the Miami Metro Rail. He worked over 40 years of his life operating his company until he retired in 2009. Coming from a strong Baptist background, it was later in life that Charles accepted Christ as his personal Lord and Savior. Deniene had the privilege of praying with him on that day. In 2009, Charles moved to the Nashville, TN area with his daughter, Deniene; they relocated to Sterling, VA in 2017, which is where he lived out his last days. He loved his family very much. Charles attended every annual Berry family reunion for 46 years. Charles was known as the strong and silent type, but around his family and friends is when he would show his more fun-loving and humorous side. His siblings, William Parks, George Dickerson, David Dickerson, Dorothy Rowland, Delores Borden, and Janet Williamson; parents Charles, Sr. and Mable Dickerson, and grandson Donald Livingston, Jr. preceded him in death. Charles Dickerson, Jr. leaves to cherish his memory, his children, Juanita (Donald) Livingston, Deborah Williams, Veronica (Robert) Shelton, and Sarah Jones; 4 grandchildren; 4 great-grandchildren; a special friend Johnnie Jewel Smith; and a host of nieces, nephews, other relatives and friends.

The family of Charles Dickerson Jr. created this Life Tributes page to make it easy to share your memories.

Send flowers to the Dickerson family.