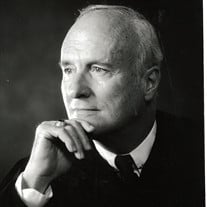 HONORABLE CHARLES HENRY DUFF Judge (retired) Virginia Court of Appeals On February 7, 2020, Charles Henry Duff peacefully passed away at age 95. Born in Houston, Texas, on February 11, 1924, Charles grew up in Richmond, Virginia, where he attended Benedictine High School. He was a member of the Class of ’45 at Virginia Military Institute, but had his college education interrupted in 1943 by World War II. Charles Duff became a commissioned officer in the United States Army, stationed in the Philippines until his return home in 1945. Following the War, Charles completed his college education at Georgetown University, where he continued to obtain his law degree – but not before marrying his wife of 67 years, Jean Marie Kelleher of Richmond, who predeceased him in 2013. In 1954, Charles Duff began what would become a most prominent legal career, as an associate attorney with Jesse, Phillips, Kling & Kendrick in Arlington, Virginia. In the early ‘60’s he started his own law firm in Arlington, focusing on insurance defense law. In 1972, he was appointed by Governor Linwood Holton to sit as a judge on the Arlington Circuit Court. In 1985 he was appointed by Governor Charles Robb to be one of the original 10 judges of the newly-created Virginia Court of Appeals. Judge Duff continued to hear and decide appellate court cases until his retirement in 2000. Charles Duff is survived by his daughter, Anne Marie Chappell, and husband, Jay, of Leland, NC; and his sons, Charles H. (“Mac”) Duff, and his wife, Holly, of Virginia Beach, VA and David L. Duff, and his wife, Nancy, of Fairfax, VA. His third son, Edward Joseph Duff, predeceased him in September of 2012, as well as his daughter-in-law, Glenna Cofer Duff in 2004. Charles Duff is also survived by his grandchildren, Lee Duff, Dr. Mary Hendricks, Kelly and Katie Chappell, and Nicole Coletta, as well as his great grandchildren, Quinn and Wesley Hendricks. He is also survived by his dear companion at Ashby Ponds, Mrs. Barbara Rose. The family further wishes to acknowledge his loving caregiver, Gita Kaderi, who made our father’s final years pleasant and comfortable. The family will receive friends at Loudoun Funeral Chapel, 158 Catoctin Circle, SE, Leesburg, VA on February 11, 2020, from 5 p.m. – 7 p.m. Funeral services will be held at St. Theresa Catholic Church, 21370 St. Theresa Lane, Ashburn, VA on February 12, 2020, at 10:00 a.m., followed by Interment at Union Cemetery, 323 N. King St., Leesburg, VA. In lieu of flowers, the family requests contributions be made in his memory to The Benedictine School, 14299 Benedictine Lane, Ridgely, MD 21660.

The family of Charles Henry Duff Jr. created this Life Tributes page to make it easy to share your memories.

Send flowers to the Duff family.