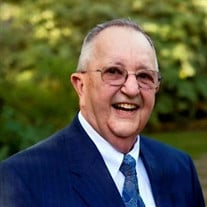 Charles (Charlie) Joseph Janak of Stone Ridge, Virginia, passed away on Friday, January 19, 2018, after a courageous ten-year battle with Non-Hodgkin’s Lymphoma. His partner throughout this battle and the love of his life was his wife, Annette. Charlie embraced all phases of his life with joy, a positive attitude, and a sense of humor, always taking great pride in being a Texan. He was born and spent his childhood in Smithville, Texas, where he enjoyed raising horses and cattle and his hobby of calf roping on his family ranch. Hunting and woodworking with his dad were among his favorite early memories. Though not as enthusiastic about working in his dad’s automobile dealership, he appreciated the skills learned there. Summer jobs with an oil exploration company and as a welder’s apprentice, a USDA crop representative, and as a college intern at the Rockefeller ranch also contributed to the development of his technical interests and skills. After graduation from Texas A&M University, Charlie joined the U.S. Navy and entered Officer Candidate School in Newport, R.I. After receiving his commission, he volunteered for the Explosive Ordnance Disposal (EOD) program and went on to complete Underwater Swim School in Key West, FL and Explosive Ordnance Disposal (EOD) training at Indian Head, MD. He was then assigned as Officer in Charge (OIC) of the EOD team aboard the USS Lake Champlain, followed by service as OIC of EOD teams in Yokosuka, Japan and in Da Nang, Vietnam. Following his distinguished military service, Charlie joined the Central Intelligence Agency where he served with honor for over 40 years in a variety of positions, the majority of which were with the Office of Technical Service, Special Activities Division (SAD). Wherever his job took him around the world, Charlie is remembered as a skilled and creative technical operations officer who unfailingly supported the Agency’s mission and who was always willing to share his skills. The enduring friendships formed with Agency colleagues, including those with the band of brothers and sisters of SAD, were among his most cherished. He spent many happy hours in his home woodworking and metalworking shop, where he enjoyed designing and building furniture and other home projects. His ability to repair just about anything and to fabricate necessary items to do so justly earned him the family nickname of “Super Tech”. Charlie especially enjoyed hunting for exotic animals in Texas with his brother-in-law; the conversations they had were undoubtedly as much fun as the actual hunts. Cooking – particularly Texas barbecue – was another of his interests; he loved nothing better than seeing family and friends enjoy meals he had prepared. Never a fair weather fan, Charlie was a staunch Texas Aggies and Dallas Cowboys supporter. In addition to his wife, Charlie is survived by his son, Christopher Charles Janak and his wife Melody Otto Janak of Austin, Texas; his daughter, Amber Elise Janak Zaharchuk and her husband, David Zaharchuk of Burlington, Connecticut; and his infant grandson, Austin Christopher Janak. He took immense pride in his beloved children – not only for their accomplishments but for their integrity, compassion and concern for others. Rather than dwelling on the loss of not being able to watch him grow up, Charlie was grateful to have had the opportunity to meet his newborn grandson a few weeks ago. Other survivors include his brother-in-law and special friend, Clem Mikeska, and several nieces and nephews. Charlie was preceded in death by his parents, Charles George Janak and Elsie Psencik Janak, as well as two sisters, Charlene McEachern and Anna Jo Mikeska, and brother-in-law, Bob McEachern. The funeral mass will be held on Saturday, March 17, 2018, at 10:00 a.m. at Saint Timothy Catholic Church, 13807 Poplar Tree Road, Chantilly, VA 20151. A brunch will follow at Clyde’s Willow Creek Farm, 42920 Broadlands Blvd., Broadlands, VA 20148 (http://clydes.com/willow-creek-farm). Inurnment will be at a later date at Arlington National Cemetery. In lieu of flowers memorial donations are suggested to Intrepid Fallen Heroes Fund (www.fallenheroesfund.org).

Charles (Charlie) Joseph Janak of Stone Ridge, Virginia, passed away on Friday, January 19, 2018, after a courageous ten-year battle with Non-Hodgkin&#8217;s Lymphoma. His partner throughout this battle and the love of his life was his wife,... View Obituary & Service Information

The family of Charles J. Janak created this Life Tributes page to make it easy to share your memories.

Send flowers to the Janak family.