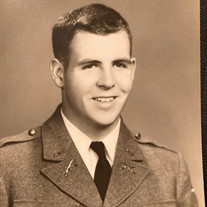 Charles Hoyt Kinney passed away unexpectedly on January 23, 2022, at the age of 82, at his home in Leesburg, Virginia. Although a lifelong bachelor, Charles (or Chuck, as he was known by close friends) led a long life filled with a variety of interests and activities. Charles was born on February 11, 1939, in Washington, DC, to Marie (Travis) and Charles E. Kinney and spent much of his youth in and around the nation’s capital. He graduated from Randolph-Macon Academy, Front Royal VA, in 1958. Subsequently he enlisted in the United States Army and was assigned to the Motor Pool Maintenance division. After serving in the Army, Charles went to work in the air traffic control industry, where he spent the next several years until his early retirement. Possibly sparked by his military experience, Charles developed a lifelong interest in firearms and spent a good portion of his time collecting and crafting replicas of antique rifles. Over his lifetime he also put together a significant collection of remote-controlled airplanes and helicopters, most of which he built himself. He could usually be found either at the shooting range, “sighting in” one of his antique rifles, or flying one of his newly-crafted remote-control model airplanes. Perhaps the thing he loved most was flying his full-size Lake fixed-wing single-engine amphibious airplane, often taking to the skies to visit family in Massachusetts. Sometimes he would simply head to Maine and land on some remote lake for no other reason than he could. Ultimately, Charles had no use for rules and conventions. He tended to do things his own way, and using his memorably picturesque vocabulary he wasn’t shy in telling anyone who would listen how he felt about politics, government, and the way of the world. Some would call him a character. Charles is predeceased by Tai Duong with whom he had a long-term, loving relationship (he was also close with Tai’s children). He is survived by several cousins: Gail (Lake) Richardson and her husband Lowell, of Wichita, KS; Diane DeTour of Boxford, MA; David DeTour and his wife Judith, of Weare, NH; Darrell DeTour and his wife Angela Martin, of Lebanon, ME; and Terry Travis and his wife Carol, of Springfield, IL, as well as several second-generation cousins, and several friends. The family will receive friends from 10:00 AM to 11:00 AM on Friday, February 4, 2022 at Loudoun Funeral Chapel, 158 Catoctin Circle, SE, Leesburg, Virginia. A small and intimate memorial service will follow. In lieu of flowers, donations may be made to the Wounded Warrior Project. Online condolences may be made to the family at www.loudounfuneralchapel.com.

Charles Hoyt Kinney passed away unexpectedly on January 23, 2022, at the age of 82, at his home in Leesburg, Virginia. Although a lifelong bachelor, Charles (or Chuck, as he was known by close friends) led a long life filled with a variety of... View Obituary & Service Information

The family of Charles Hoyt Kinney created this Life Tributes page to make it easy to share your memories.

Send flowers to the Kinney family.