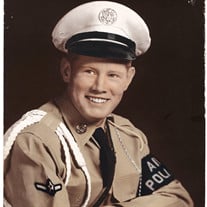 Charles Sidney “Sid” Mercer, age 79, a lifelong resident of Leesburg, VA, passed away peacefully surrounded by his family on Friday, June 15, 2018, at his home in Leesburg. Born Wednesday, September 28, 1938, he was the son of the late John Nathaniel and Della Aline (Jackson) Mercer. In Sid’s younger years he played baseball in Loudoun County for the Leesburg and Lucketts teams. Sid went to school at Leesburg Elementary and Loudoun County High School. After leaving high school he joined and proudly served his country in the United States Air Force. Sid retired from the Virginia A.B.C board after 30+ years. Post retirement Sid worked for the local Walmart and the Loudoun County Library for 13 years. Sid enjoyed going to the Senior Center where he played cards and shot pool. He had many friends there. He leaves behind a loving wife, Jacqueline Anne (Barton)Mercer, of 57 years, son Michael Ray (Lynn) Mercer of Leesburg, VA, grandson Dylan Ray Mercer of Leesburg, VA, granddaughter Shelby Lynn (Katie) Glenn, of Harrisburg, PA, a sister Barbara Jean (Buddy) Mann of Marietta, GA, and many nieces and nephews. He was preceded in death by brothers: John D. and Franklin Lee Mercer and a sister Mary Lou Bunch. A funeral service will be held at 11:00AM on Wednesday June 20, 2018 at Loudoun Funeral Chapel 158 Catoctin Cr. SE, Leesburg, VA with the Reverend Dr. Ken Patrick officiating. Interment will follow at Leesburg Union Cemetery. A visitation will be held from 6:00 to 8:00PM on Tuesday June 19, 2018 at the Funeral Chapel. In lieu of flowers the family requests donations be made to Blue Ridge Hospice 333 West Cork Street #405, Winchester, VA 22601.

The family of Charles "Sid" Mercer created this Life Tributes page to make it easy to share your memories.

Send flowers to the Mercer family.