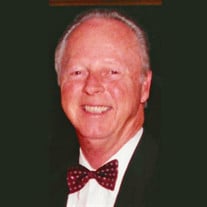 Charles Robert Norris, III, 88 of Leesburg, Virginia passed on Tuesday, March 30, 2021, at Inova Loudoun Hospital, Leesburg, Virginia, with his loving wife of sixty years, Frances (Bunny) Carnes Norris, at his side. Born on July 28, 1932 in Alexandria, Virginia, he was the son of the late William Norris and the late Margaret James Norris, brother to the late Elizabeth (Betty Jane) Martin, and nephew to the late Eleanor W. James. Along with his wife Frances (Bunny) Carnes Norris, Charles is survived by his son Charles (Rob) R. Norris IV and grandson Charles (Charlie) R. Norris V, all lifelong residents of Loudoun County, VA; nephews Geoffrey Schelhorn (Betty), Robert Schelhorn (Terry), Thomas Schelhorn and niece Rebecca Dunlop, all of Virginia; Joni Owens of Carey, NC, Tim Owens of Stephens, City, VA, Vicki (Duane) Greenfield, Lancaster, PA, Andy (Kellie) Owens, Leesburg, VA, Paula and (John) Flamish of Ashburn, VA He attended George Washington High School, Alexandria, VA and The Columbia Technical Institute, Washington, DC. Chuck, as he was affectionately known, had a wonderful voice accented with a smile. He could really tell a joke and laughed along too. A true people person, he also enjoyed working with his hands, had a long career in the construction, millwork and building materials business and was one of the founders of Shenandoah Sash & Door of Purcellville VA. He was an Emeritus member of the Advisory Board of Kolbe and Kolbe, Wausau, WI. He was, most importantly, a kind, thoughtful person and will be missed by everyone his beautiful soul touched. A Memorial Visitation will be at 12:00 Noon, with Service following at 1:00pm on Saturday, May 15th at Loudoun Funeral Chapel located at 158 Catoctin Circle, SE Leesburg, Virginia 20175. Following the service, interment will be at Union Cemetery, Leesburg, VA. Even though we are grieving the family requests all social distancing and PPE protocols are strictly followed.

The family of Charles Robert Norris III created this Life Tributes page to make it easy to share your memories.

Send flowers to the Norris family.