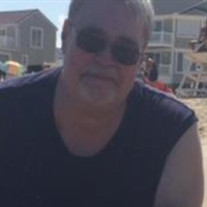 Chris Allan Betz, 65 of Reston, Virginia passed away on Tuesday, February 9, 2021, at Hunters Woods at Trails Edge in Reston, Virginia. Born Wednesday, December 28, 1955 in Danville, Pennsylvania, he was the son of the late Freeman Betz and the late Nancy Hill Betz. Chris is survived by his daughters, Megan Trenary and her husband Jonathan, Kelsey Betz and her husband James Naples, and son Derek Betz. Also surviving are Chris’s grandchildren, Aiden and Emelia Betz, Violet and Keary Trenary, and a fifth grandchild on the way. Chris leaves behind three siblings, the Rev. Allyson Estes and her husband Tracy, Carl Betz and his wife Donna, and Lee Gordner and her husband Jeff, as well as nieces and nephews whom he loved. Chris had a long career as an anesthetist in Northern Virginia after completing nursing school in Pennsylvania. He was passionate about music (especially the Beatles), movies and TV, and had a lifelong love for the Philadelphia Phillies, the Dallas Cowboys, and Penn State football. Chris treasured his time with his grandchildren and watching them grow. Chris had a special bond with his oldest grandchild, Aiden, with whom he had the most time. The past year and the restrictions that came with the pandemic limited Chris’s ability to see his grandchildren as much as he would have liked, but his younger grandchildren learned to visit “Grandpa” every week, even if that visit was on a video call or through a plastic barrier at his assisted living facility. His family will miss his sense of humor, his generosity and kindness, and his ability to listen and give positive, sound advice to his children. Despite chronic health issues, Chris developed a positive outlook on life that he maintained even in the midst of a challenging year. Chris cared deeply about social justice issues, especially in his last years of life. His family would like to acknowledge the staff at Hunters Woods for the care and companionship they provided that helped him feel settled and at peace in his last months. Per Chris’s wishes, his family will remember him later this year in Danville, Pennsylvania for a celebration of life ceremony. In lieu of flowers, the family requests that donations be made to https://www.capitalareafoodbank.org/donate/ or to a local food pantry. Online condolences may be made to the family at www.loudounfuneralchapel.com

Chris Allan Betz, 65 of Reston, Virginia passed away on Tuesday, February 9, 2021, at Hunters Woods at Trails Edge in Reston, Virginia. Born Wednesday, December 28, 1955 in Danville, Pennsylvania, he was the son of the late Freeman Betz and... View Obituary & Service Information

The family of Chris Allan Betz created this Life Tributes page to make it easy to share your memories.

Chris Allan Betz, 65 of Reston, Virginia passed away on Tuesday,...

Send flowers to the Betz family.