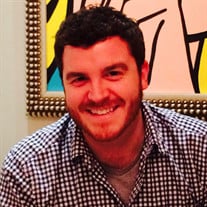 On December 10, 2018, Christopher David Myers died peacefully in his sleep. He was born on Friday, January 13, 1984 in Fort Wayne Indiana. He was the son of Debbie Skinner Myers and the late John Robert Myers. He is survived by his sister, Stephanie Myers Perhach, brother-in-law Peter Cameron Perhach, and his nieces, Julia Faith and Scarlett Christiana Perhach. Chris was raised in Fort Wayne, Indiana and Granger, Indiana. Chris enjoyed entertaining crowds of people starting at a very young age. Growing up as a ministers’ son, he was groomed to be a performer in the church. At four years old he sang “O Holy Night” as Tiny Tim in “A Christmas Carol”. He was signed with an opera company at the age of nine, touring with Amahl and the Night Visitors, as Amahl. By twelve, he performed in the Broadway Tour of Joseph and the Amazing Technicolor Dreamcoat. He attended Penn High School in Indiana and moved to Fort Lauderdale, Florida and graduated from St. Thomas Aquinas High School in 2002. Various other roles would allow Chris the opportunity to grow as a performer throughout the years. Following family tradition, he went to Purdue University and became a soloist in the Purdue Varsity Glee Club. After his Freshman year, he signed his first record deal with Sony Music/Epic Records in Germany, Switzerland, and Austria. As a member of the boy band, Fource, Chris toured thirteen countries – performing on national television shows throughout Europe. With two certified Gold records and a compilation album selling six-times Platinum, the group was beginning to gain momentum. However, Chris decided to come to Purdue to finish his studies. He graduated in 2007 with a degree in Film and Video Production. Chris attended NYU and graduated with his Master’s Degree in Graphic Communications Management and Technology in 2014. He worked in Marketing and Sales, and pursued his passion writing Social Life the Musical with a small creative team. He also wrote and continued to perform his original music. Chris moved to Virginia to be surrounded by his family. Here he continued to work in marketing, design, and songwriting. A loving son, brother, nephew, cousin, uncle, brother-in-law, and friend to many. Chris lit up the world with his incredible spirit. His voice was a gift from God. He used his gifts to reach millions and change lives. There was never a crowd too big or too small. He was an entertainer. He was a thrill seeker. Rollercoasters, Bungee Jumping, and Skydiving were just a few things he loved. Going to movies and eating popcorn were a favorite pastime. From a very young age- eighteen months to be exact, Christopher knew what he wanted. He wanted to change the world. With every song he wrote, performance on stage, hilarious joke, or heart-felt moment he shared – he was able to reach out and touch your soul. He was always there for a good hug and a warm smile. And even when he messed up, he would be the first to admit it. His heart was enormous. His energy was tangible. He was a dreamer, a believer, and a creative force. He will always be remembered. He was a very good man – and he meant the world to us all. We’d give anything to still have him here with us, but I know he will always watch over and protect us, as he is now with God above. We will always love you, Chris. Psalm 119:105 Thy Word is a lamp unto my feet and a light unto my path. In lieu of flowers memorial contributions may be made to www.onethirteenfoundation.org. Please share online condolences with the family at www.loudounfuneralchapel.com

On December 10, 2018, Christopher David Myers died peacefully in his sleep. He was born on Friday, January 13, 1984 in Fort Wayne Indiana. He was the son of Debbie Skinner Myers and the late John Robert Myers. He is survived by his sister,... View Obituary & Service Information

The family of Christopher David Myers created this Life Tributes page to make it easy to share your memories.