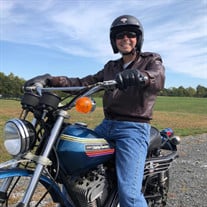 Christopher Paul Wasko, age 60 of Leesburg, Virginia passed on Friday, June 18th, 2021, in Aldie, Virginia. Born November 23, 1960 in Bethlehem, Pennsylvania, he was the son of Richard Wasko and the late Frances Ernst Wasko. Chris graduated with a degree in civil engineering from Lehigh University in 1982 and began his professional career with FM Global. He worked 32 years as a commercial and industrial insurance adjuster, before retiring in January of 2021. After more than 3 decades of a very satisfying career, it was the friendships that were formed with co-workers and consultants that meant the world to Chris. Chris loved his family above all else. While Chris thought his greatest joy was his 3 children, he learned a new joy when we welcomed his grandchild, Claire Wasko, to this world. Chris was a man of great integrity. He lived life to the fullest (and fastest in any classic Mopar he could find) and he fought cancer with all his might. He never complained and was always thankful for the care he received. Chris and his family will be forever grateful to Dr. Rajendra and his wonderful staff along with the staff at the Adler Center and Johns Hopkins Hospital. Chris is survived by his wife, Judith Rantz Wasko, sons, Josh and Jake Wasko, daughter, Anna Claire Wasko, daughter-in-law, Sarah Wasko, and granddaughter, Claire Wasko, as well as his two brothers. A funeral mass will be at 10:00 AM on Thursday, June 24th at St. John the Apostle Catholic Church located at 101 Oak Crest Manor Leesburg, Virginia 20176. Interment will be in St. John's Catholic Church Cemetery, Leesburg, VA. In lieu of flowers, the family kindly asks that donations are made to Loudoun Hunger Relief at https://www.loudounhunger.org/, which is a cause and organization that Chris was passionate about.

The family of Christopher Paul Wasko created this Life Tributes page to make it easy to share your memories.

Send flowers to the Wasko family.