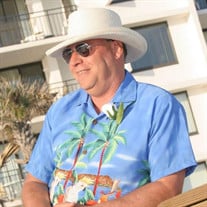 Daniel Joseph Killeen, 67 of Ashburn, Virginia, unexpectedly crossed over on Sunday, November 8, 2020, at New Hanover Regional Medical Center in Wilmington, North Carolina. Born Friday, January 16, 1953 in Brooklyn, New York, he was the son of the late Daniel T. and Dorothy (Harbester) Killeen. Some knew him as a gentleman, others as a friend, and he joined us together as comrades whatever the occasion would be. Dan had a servant’s heart, and his faith was his daily companion. A mighty man he was, full of love and happiness and wearing a broad smile. Always asking and willing to help others. Dan loved to dance and played guitar and piano in his high school days. He had a wealth of knowledge where music was involved and knew artists and their stories well. He enjoyed cars and racing in earlier years. He was the proud owner of a 1989 Hatteras which he restored as a retirement home, but his joy was his 1999 Jaguar XK8, a gift from his wife for Father’s Day. Dan and Rose Marie were members of Chesapeake Bay Yacht Clubs Association (CBYCA) and Maryland Yacht Club where they kept their boat ‘Everything’s Rosie’. In 2019 as Rear Commodore of CBYCA, Dan was instrumental in organizing CBYCA’s first Commodores’ Summit. The Summit was a tremendous success developing relationships and support in a unified manor to member clubs. Plans are in motion for a 2021 Summit to continue this effort. As Vice Commodore of CBYCA, Dan embraced the forward momentum started with the 2019 Summit. In addition to building a closer relationship between CBYCA, Delaware River Yachtsmen’s League, Yacht Clubs of Maryland, and the Chesapeake Commodore’s Club, Dan built a solid platform onto which all CBYCA member clubs could come together, share experiences, provide each other support, and move into the future full of challenges. He was elected to Commodore for 2021 and would have been presented his gavel on 21 November 2020. Rose Marie's wish is for the organization to keep the forward momentum that Dan worked so hard to establish. Dan retired several times from various entities: the CIA, several contract companies, IBM & Verizon. He held an Associate Degree in Electrical Engineering with Microsoft certification. Dan is survived by his loving wife, Rose Marie Killeen and their adopted pet Belle, his daughter Maeghan (John) Nicholson of McFarland, WI, his son Robert (Amanda) Killeen of Viroqua, WI, one grandson, three granddaughters and one granddaughter, Anya Christine Nicholson, due 4 December. A Funeral service will be conducted from 2:00-6:00 PM on Tuesday at Loudoun Funeral Chapel located at 158 Catoctin Circle, SE Leesburg, Virginia 20175. Online condolences may be made to the family at www.loudounfuneralchapel.com In lieu of flowers or donations, we ask that you take a moment to hug your child, grandchild, parent, friend or walk in the sunshine after a rainstorm and enjoy a rainbow for a moment, an hour or a day. Time waits for no one.

The family of Daniel Joseph Killeen created this Life Tributes page to make it easy to share your memories.

Send flowers to the Killeen family.