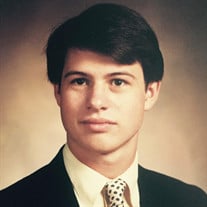 David Hutcheson Sowards, 50 of Philadelphia, PA passed away on Sunday, November 1, 2015. David was born Saturday, February 6, 1965, in Leesburg, Virginia. A graduate of Loudoun County High School and a graduate of VCU, in Richmond, VA, David worked as an office manager in the architectural industry. He leaves his family to cherish his memory including his parents, Alvin G. and Jane C. Sowards of Leesburg, VA; his brother, Alan Sowards and sister-in-law, Traci of Cary, NC, nieces Hayley and Cassidey. A memorial service to celebrate David’s life will begin at noon on Saturday, November 14, 2015, at Loudoun Funeral Chapel located at 158 Catoctin Circle SE, Leesburg, Virginia 20175. The family will receive guests one hour prior to the services. Interment will be held privately at a later date. In lieu of flowers, memorial donations may be made in David’s memory to the American Foundation for Suicide Prevention (AFSP) or Philadelphia FIGHT (a comprehensive health services organization providing primary care, consumer education, research, and advocacy for people living with HIV/AIDS and those at high risk). AFSP: http://afsp.donordrive.com/index.cfm?fuseaction=donorDrive.personalCampaign&participantID=944969&language=en PHILADELPHIA FIGHT: http://fight.org/ Online condolences may be made to the family at www.loudounfuneralchapel.com

The family of David Hutcheson Sowards created this Life Tributes page to make it easy to share your memories.

David Hutcheson Sowards, 50 of Philadelphia, PA passed away on...

Send flowers to the Sowards family.