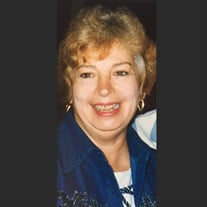 Dolores ‘Dottie’ Nell (Games) Sander, 79 of Leesburg, VA, and Pittsburgh, PA, passed away peacefully on Monday, September 30, 2019, at her daughter’s home in Leesburg, Virginia. Born Saturday, January 6, 1940, in Moundsville, WV, she was the daughter of the late Howard L. Games and the late Mary Ann Fulton. Dottie was in her 20’s and moved to Pittsburgh, PA. In 1964, she married her loving husband, the late Guenther ‘Whip’ Sander. They were married until his passing in 1982. After her daughter Dana was born, Dottie gave up working to stay home with her. While at home, Dottie made most all of Dana’s clothes. She became part of a loving group of parents on Petunia Avenue who created many fond memories for the children who grew up there. When Dana grew older and went to school, Dottie became a school bus driver. She did this so she could work while her daughter was in school and be home with her after school. Driving a school bus allowed her to be home every evening to make dinner for her family (even though she wasn’t fond of cooking). She was also able to help Dana with homework, take her to various musical instrument lessons along with swimming, softball, basketball, and bowling practice, confirmation classes and every other activity Dana was engaged in at the time. She was a PTA Mom, a Girl Scout leader, and a Team Mom and scorekeeper for the girls’ softball team who was coached by her husband Whip. After ‘Whip’ died, she took a position working for the Veterans Administration in Pittsburgh. She remained with them until she moved to Leesburg, VA, in 2000. She chose this move in order to be closer to her daughter and her beloved granddaughter Kelly. In 2013 she married the late Richard Schroeffel and lived with him in Pittsburgh until his death in 2018. In addition to being a loving wife, mother, and grandmother, Dottie enjoyed polka, country and western dancing, playing bingo with her friends, watching the Penguins/Steelers, and trips to the beach(especially Hawaii). Dottie is survived by her daughter, Dana (Sander) McFarland, of Leesburg, VA, granddaughter, Kelly (McFarland) Elvik of Leesburg, VA, brother Frederick L. Games of Wheeling, WV, and many nieces and nephews. She was preceded in death by her sister, Josephine A. Frey of Florence, KY. In lieu of flowers, the family is asking for donations to the American Kidney Foundation. Funeral Services will be held at 3:00pm Monday,October 7, 2019 at: Holy Trinity Lutheran Church 605 W Market St Leesburg, VA 20176 Additional Services will be held in Pittsburgh at 2:00pm on Tuesday, October 8, 2019 at: Mt. Royal Cemetery 2700 Mt. Royal Blvd Glenshaw, PA 15116

The family of Dolores N Sander created this Life Tributes page to make it easy to share your memories.

Send flowers to the Sander family.