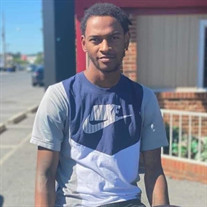 Donald Nathaniel Baker was born on November 24, 1998 in Fairfax, Virginia. From birth, Donald’s personality was infectious. Donald’s good attitude and likeability made him a well-loved and popular person. Donald had a love for basketball at an early age. He played basketball for Dominion High School, from where he graduated in 2017. As an adult, Donald held various jobs, at the FedEx warehouse, Enterprise Rental Cars, and Cavalier Logistics. Donald loved cars, and he even started his own business with his best friend and cousin, Andrew Corum, D & D Detailing. Donald was not your average 22-year-old. He was responsible, loving, charismatic, funny, and his smile lit up a room and was instantly contagious. Donald was devoted to making others laugh… whatever it took, a dance, a poke, a joke, a reminder of something dumb you did, physically lifting you up, a bear hug, a kiss… whatever it was, there was a laugh with it. Donald loved to have fun and hang out with his family and friends. He became the family bartender and was dubbed, “The Strawberry Henny Mixologist.” Nothing stood in the way of getting drinks with Donald… No cups, no problem… We will use bowls. Donald developed a love for motorcycles and motorcycle racing like his big cousin and “big bro”, Patrick Nickens, Jr. His love for that bike life was unparalleled. Once Donald began racing, going to the racetrack was life. Donald was extremely excited because he had just purchased a new motorcycle. Donald departed this life on October 1, 2021 after an unfortunate motorcycle accident. He had a heart of gold and a beautiful soul. To know him was a gift, to be in his presence was a joy, and to be a part of his life was a blessing. Donald was preceded in death by his great-grandmother, Pauline, his grandfather, Arthur Nickens Sr., and an uncle, Patrick Nickens Sr. He leaves to cherish his parents, Evelyn and Franklin Baker, Jr.; his brother, Franklin Baker III; his sister, Latisha Baker; his grandparents, Martha Corum, Lonnie Branham, Dorothy Nickens, and Franklin Baker Sr.; three uncles, Amos Nickens, Lionel Wilkerson, and Jermaine Courm, ten aunts, Rae Baker, Connie Nickens, Angela Nickens, Angela Swain (Sequoyah), Juanita Corum, Victoria Corum, Erica Wilkerson, Jessie Wilkerson, Veronica Caldwell (Roger), and Francita Baker; three nephews, Zechariah Baker, Marcus Jones, and Isaiah Jones; two nieces, Martika Baker, and Malia Baker; great aunts and great uncles, a special friend, Jasmine Corbett, his best friend Donald Burrill, host of first cousins, who were more like sisters and brothers, family, and friends.

Donald Nathaniel Baker was born on November 24, 1998 in Fairfax, Virginia. From birth, Donald&#8217;s personality was infectious. Donald&#8217;s good attitude and likeability made him a well-loved and popular person. Donald had a love for basketball... View Obituary & Service Information

The family of Donald N. Baker created this Life Tributes page to make it easy to share your memories.

Send flowers to the Baker family.