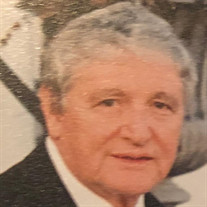 Donald James Calder, USN Commander (Ret), 86, of Ashburn, Virginia passed away peacefully on September 20, 2021 after a long life serving his country and raising a large family with his wife Charlene. Don Calder was born on August 23, 1935, in Baltimore, Maryland to Andrew S. Calder and Ann McCarthy Calder. He was the third of their four sons. Don was very close to all his brothers, Thomas R. Calder, Andrew E. Calder, and Kenneth J. Calder. Don was a graduate of the University of Baltimore. He married his soulmate, Charlene (nee Richards) on September 23, 1956 prior to joining the Navy as a naval aviator. Charlene was the “pillar of strength” for the family raising their four children, Michael, Mark, Craig, and Christie in support of her military husband. Early in Don’s Navy career, he volunteered and was selected as the pilot of one of the two helicopters to perform a rescue mission of four scientists that were trapped in an Antarctic blizzard. The four scientists were stranded without food or water for three days and proper shelter, because the winds were so fierce at over 100 mph. Despite the dangerous conditions, Don and his crew were successful in the rescue mission making Don the hometown hero of Baltimore. He was awarded the Antarctica Service Medal, his first service medal. He went on to be awarded many other Medals from Meritorious Service to Air Medals. Don’s distinguished military career included multiple tours of duty in Vietnam, a prestigious role as the Naval Attaché at the American Embassy in Athens Greece, the Commanding officer of the Helicopter Combat Training (HCT-16) program in Pensacola FL, and numerous assignments at the Pentagon including serving on the Joint Chiefs of Staff. After more than two decades of military service, he retired as a Commander in the US Navy. After his final assignment at the Pentagon, Don, Charlene, and the family settled in Northern Virginia. Don continued working in the private sector and dedicated another 30 years supporting his country as a government contractor with General Dynamics, which enabled Don to continue to travel the world in support of those initiatives. An avid outdoorsman, Don enjoyed hunting and was a key member in the Deer Cinch Rod and Gun Club in Dorchester County, MD. His love for family and nature was measurable in the family memories spent at the hunting camp established by his father, brothers, and their offspring as they invested decades preserving and caring for large swaths of property in Crapo, MD. Additionally, Don & Charlene maintained a family tradition of summer vacations in Ocean City for many decades and enjoyed international cruises with Charlene’s sister Carole and husband, Charley McCurley. In 2009, the couple settled into their final home at Ashby Ponds in Ashburn, Virginia, close to their family and lifelong friends in the NOVA area. They continued to enjoy their family events, traveling and frequent trips to the farm in Crapo, MD. Don is preceded in death by his loving wife of 63 years, Charlene Richards Calder; his parents Andrew S and Ann M Calder; his brother, Thomas Calder; and his brother, Andrew E Calder. He is survived by his brother, Kenneth Calder; four children: Michael (Kathleen) Calder, Mark (Robin) Calder, Craig (Karen) Calder and Christie (Lee) Kestler; as well as 11 grandchildren: Curtis and David Calder, Darcy, Joseph, and Andrew Calder, Chelsea and Kaylee Calder, Samantha and Ryan Booth, Andrew and Jordan Kestler, and one great grandchild, Oliver Kestler. A private ceremony and interment will occur at Arlington National Cemetery in February of 2022. In lieu of flowers donations can be made in memory of his love of fishing in Ocean City, MD at www.Ocreefs.org. We will be building a small reef in his memory.

Donald James Calder, USN Commander (Ret), 86, of Ashburn, Virginia passed away peacefully on September 20, 2021 after a long life serving his country and raising a large family with his wife Charlene. Don Calder was born on August 23, 1935,... View Obituary & Service Information

The family of Donald James Calder created this Life Tributes page to make it easy to share your memories.

Send flowers to the Calder family.