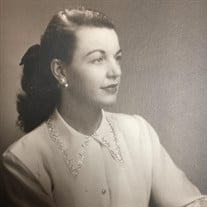 Dora Kenyon Brumfiel 95, artist and world traveler, passed away June 19, 2018 at Falcons Landing in Potomac Falls, VA. Born Dora Kenyon in Amarillo, Texas December 19, 1922, Dora received her B.A. in English and Art at the University of Texas in Austin and was a staunch lifetime Longhorn. After graduating, she worked as a commercial advertising artist in Amarillo until she met and fell in love with R. Thomas Brumfiel, an Air Force Lieutenant from Chevy Chase, MD, who was stationed at the base in Amarillo. They married and embarked on a life of travel with their children Robert (Rob) and Tracey (Tab), living in Japan, Germany, Saudi Arabia, New York, Maryland and Texas and using every opportunity to travel throughout Asia, Europe, the Middle East, India and Africa. Lt. Col. and Mrs. Brumfiel retired initially to Potomac, MD., then to Falcons Landing in VA. Everywhere they moved, Dora established a busy portrait studio, working in oils, pastels, conte’ and charcoal. Known for her indomitable spirit and her zest for life and adventure, she was an active hostess and volunteer, as well as a beloved wife, friend, mother and grandmother. Dora is survived by her daughter Tracey Nelson, son-in-law David Nelson and grandson Drew Nelson, all in Austin, and her granddaughter Kate Nelson in Denver. Please share online condolences with the family at www.loudounfuneralchapel.com

The family of Dora Kenyon Brumfiel created this Life Tributes page to make it easy to share your memories.

Send flowers to the Brumfiel family.