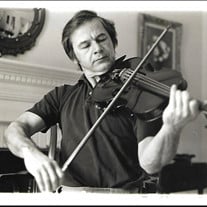 Dr. Albert C Casabona, Jr of Leesburg, VA passed away May 6, 2020. Albert was an accomplished surgeon, a classical musician and music enthusiast, and had a larger-than-life personality that lit up every room he walked into. He leaves behind his wife of nearly 35 years, Patricia S Casabona. Albert was born in 1926 in McKeesport, PA, to Alberto Carlo Casabona originally of Genoa, Italy, and Virginia Richards of McKeesport PA, USA. Albert grew up in McKeesport, where he lived downtown with his parents, his sister Marguerite, and an extended family of aunts and uncles above the drug store, which was the family business. Early on, Albert gained a love of classical music from his father who was an accomplished concert violinist, and his mother, who taught violin and piano. He was dissuaded from studying music by his parents, who steered him to the more practical field of medicine. He graduated from McKeesport High School in 1944 and was accepted into the V-12 Navy College Training Program. He graduated from Ursinus College in 1946, completing his studies in only 18 months, and served in the US Navy as a medical officer on an aircraft carrier during the Korean War, achieving the rank of Lieutenant MC. In August 1952, Albert married Nancy Gould Zenn, also of McKeesport. After the war, he completed medical school at the University of Pittsburgh and his residency in Orthopedic Surgery at the Cleveland Clinic. In 1961, the couple moved to Annandale, Virginia where Albert was a founding member of the Fairfax Orthopedic Clinic and Commonwealth Doctors Hospital. He practiced as an orthopedic surgeon in Fairfax until his retirement in 2002. Albert and Nancy had four children: Susan Richards, Elizabeth Zenn, Albert Charles III, and Helen Gould. In June 1985, he married Patricia Tucker, and became step-father to James Tucker and Joanna Ford. As an adult, Albert was finally able to pursue his love of music. He started playing both violin and viola, and this became his passion for decades. He was a violist in the Arlington Symphony throughout the 1970s and 1980s, and was devoted to classical chamber music, hosting many musical string quartet parties over the years. Albert will be greatly cherished and missed by his family, friends, and so many people who were fortunate to have him in their lives. Albert is predeceased by his first wife, Nancy, his sister Marguerite Casabona Julin of Cleveland, Ohio and step-son James Tucker. In addition to his loving wife, Patricia, Albert leaves behind Susan Casabona and Philip Sherburne, Elizabeth and Tom Cronauer, Charlie and Brenda Casabona, Helen Casabona and John Anderson, Joanna Tucker and Bill Ford, four grandchildren, and one great grandchild.

Dr. Albert C Casabona, Jr of Leesburg, VA passed away May 6, 2020. Albert was an accomplished surgeon, a classical musician and music enthusiast, and had a larger-than-life personality that lit up every room he walked into. He leaves behind... View Obituary & Service Information

The family of Dr. Albert C. Casabona Jr. created this Life Tributes page to make it easy to share your memories.

Send flowers to the Casabona family.