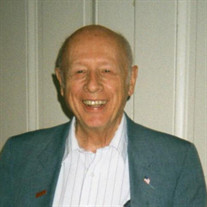 Dwight Ink, 99, passed away peacefully on October 17. He was a 20-year resident of Lansdowne but lived his final days at the Johnson Center in Sterling. Dwight was dedicated to the ideal of public service and worked in top-level policy positions under seven U.S. presidents. Born September 9, 1922 to parents Dwight P. and Edna (Craun) Ink, Dwight Albert Ink grew up in rural Madison County, Iowa, living through the Great Depression and the droughts which destroyed his family’s orchard. He left college in 1942 to join the U.S. Army during World War II, attaining the rank of captain before returning to college in Iowa. With his BS and Masters of Public Administration, Dwight launched his career in the public service. Dwight went to work for the Atomic Energy Commission in Oak Ridge, TN and then Washington, DC, rising to Assistant General Manager. During the next 40 years, he worked in a succession of policy and management positions under presidents Eisenhower, Kennedy, Johnson, Nixon, Ford, Carter, and Reagan. These included several presidential appointments requiring U.S. Senate confirmation. His broad policy expertise ranged from nuclear disarmament to civil service reform; from the reconstruction of Alaska following the 9.2 Richter scale earthquake in 1964 to the management of public corporations; and dealing with political unrest and economic development programs in more than a dozen Latin American countries. Dwight capped his career serving as president of the Institute of Public Administration in NYC. Remaining professionally active well into his 90’s, Dwight was an ardent supporter of the American Society for Public Administration and the National Academy of Public Administration, serving in both organizations for more than 50 years. He published his fourth book -- a college textbook -- at age 95, received an honorary doctorate from his beloved alma mater, Iowa State University, at 96; and in 2019 was inducted into the first class of the Government Hall of Fame along with Teddy Roosevelt, the Apollo 11 Astronauts, Elliot Richardson, Colin Powell, and Anthony Fauci. But to his many friends and family, Dwight was best known for his story-telling, entertaining them with tales of his growing up in Iowa, attending a one-room schoolhouse, and running home barefoot in a snowstorm; or sharing anecdotes from his many interesting assignments in the U.S. government. He had little time for hobbies, but Dwight -- a farmer at heart -- loved his gardens and trees. He and his wife traveled widely and attended public management conferences all over the world. Dwight’s marriage to Margaret (Child) Ink ended in divorce, but gave him five wonderful children to whom he was incredibly devoted: Stephen (Sharon); Bruce (Jean); Lawrence (Hannah); Barbara (Anthony); and Lauri, all of whom survive him, along with stepson David Wolf; 7 grandchildren, and 5 great grandchildren. His marriage to Dona Wolf and their 45-year partnership was the highlight of his life, as he would tell everyone. American government lost a true public servant and one of its greatest supporters in Dwight Ink, and his family lost their loving patriarch. Memorial services will be on Saturday, December 4 at 2 p.m. at the Loudoun Funeral Chapel in Leesburg, 158 Catoctin Circle, S.E. Leesburg, VA. Interment will be in Arlington National Cemetery at a later date. In lieu of flowers, donations may be made to the Dwight Ink Endowment Fund, Iowa State University Foundation, 2505 University Blvd, Ames, Iowa 50010-2230.

Dwight Ink, 99, passed away peacefully on October 17. He was a 20-year resident of Lansdowne but lived his final days at the Johnson Center in Sterling. Dwight was dedicated to the ideal of public service and worked in top-level policy positions... View Obituary & Service Information

The family of Dwight A. Ink created this Life Tributes page to make it easy to share your memories.

Send flowers to the Ink family.