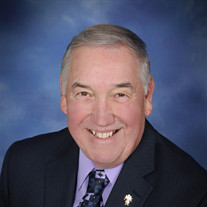 Edward Ronald Mayr was born June 3,1941 in Latrobe, PA to Joseph Mayr and Gertrude Florence Huskey Mayr. On December 21, 2018, he peacefully went to be one of God’s Christmas Angels. He is survived by his wife of 56 years, Betsy Mayr, and his 3 children: Ronald Jr. (Cindy), Steven (Melissa), Shari Vincent (Curt). His grandchildren are the apples of his eyes: Joseph & Matthew Mayr; Kaley, Abby, C.J., Briana & Emma Vincent. Mr. Mayr attended Holy Trinity Catholic School and graduated from Ligonier Valley High School in 1959; he attended Allegheny Technical Institute in Pittsburgh. Mr.Mayr enlisted in the U.S. Army where he was a communication expert stationed at Ft. Bliss in El Paso, TX. He met his best friend and love-of-his-life while at Ft. Bliss. Upon completion of his enlistment, he was employed by AT&T from 1964 and retired in 1989. He started a new career working for the Commonwealth of Virginia and retired from the Town of Herndon, VA in 2007. He then was a greens keeper at Herndon Golf Course until he moved to the Richmond area in 2016. Ed loved God, family and community. He loved working with the youth; he spent many hours working with Cub and Boy Scouts and brought excitement to the Pack and Troops in Baltimore, MD and Charleston, WV. He was awarded the St. George Medal for outstanding service to youth through Catholic Scouting. He was also an advisor with CYO and coached Girls Basketball and Softball in Parkville, MD. He served as an Extraordinary Minister at both St. Ursula Catholic Church in MD. and also Sacred Heart Co-Cathedral in WV. He was a High School Football Official for 40 years in PA, VA, MD and WV. He was a High School Basketball official for 30 years. In Leesburg, Ed coached girls softball for many years. He started pitching clinics, bringing people with expertise and ways to transition from slow pitch softball to fast pitch softball. Leesburg Parks & Recreation honored him by naming a softball field the Ed & Betsy Mayr field at Freedom Park. He also taught Young Driver Improvement for 20 years. He was an active member of the Knights Columbus and 4th degree Knights both in Leesburg and Mechanicsville, Virginia, and a Member of the American Legion in Pennsylvania and Mechanicsville, VA. Throughout his life Ed loved the outdoors. He always spent a week of his vacation at Boy Scout camp; took youth camping for parish camping trips. In later years & retirement he camped in his RV, joined a camping group Cardinal Winnie Tascas, served as Secretary & Vice President. He and Betsy took many trips taking the grandchildren when they weren’t touring the U.S. When they sold their home they lived in the RV and their home was where the wheels stopped. On trips he attended church and took pictures of all churches visited. He was also an avid golfer and hit the links anytime he could, he also visited golf courses throughout the U.S. Friends may call on Thursday, December 27, 2018 from 2-4pm and 6-8pm at Loudoun Funeral Chapel 158 Catoctin Circle, SE, Leesburg, Va. Mass of Christian burial will be offered on Friday, December 28, 2018 at 9:00am at St. John the Apostle Catholic Church 101 Oak Crest Manor Drive, Leesburg with interment to follow at St. John Cemetery in Leesburg. Memorial donations may be made in Edwards' memory to The Leukemia & Lymphoma Society, Donor Services PO Box 98018, Washington DC 20090-8018. Please share online condolences with the family at www.loudounfuneralchapel.com

Edward Ronald Mayr was born June 3,1941 in Latrobe, PA to Joseph Mayr and Gertrude Florence Huskey Mayr. On December 21, 2018, he peacefully went to be one of God&#8217;s Christmas Angels. He is survived by his wife of 56 years, Betsy Mayr,... View Obituary & Service Information

The family of Edward Ronald Mayr Sr. created this Life Tributes page to make it easy to share your memories.