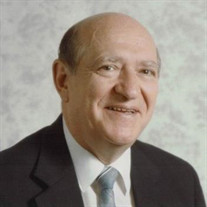 Edward Earl Plowman, Jr. of Ashburn, VA, entered peacefully into eternity on Wednesday evening, December 19, 2018. He was 87. Ed was born to Roberta and Edward Earl Plowman, Sr. in Hanover, PA on September 27, 1931, the oldest of six children. He would later meet the love of his life and future wife, Rose Orazi, at a Baptist church they both attended. They worked together in children’s outreach and broadcast ministries. In 1952, the two married and would go on to raise four children. A graduate of Philadelphia Bible Institute, Wheaton College and Dallas Theological Seminary, Ed entered the ministry as a youth pastor in San Diego, CA. In 1960, he became the senior pastor of Park Presidio Baptist Church in San Francisco. There, he developed a multi-cultural ministry including an outreach ministry to the Chinese moving into the church’s neighborhood. He was instrumental in setting up classes to teach Chinese school children the Chinese language (predominantly Cantonese) and culture. Additionally, he established English classes for Chinese adults as well as church services, counseling centers and pastoral ministries in Cantonese and Mandarin. The work he did with youth of all nationalities grew into one of the largest outreaches in the city. Ed liked to say that he was a “jack of all trades master of none”. In reality, he was a highly gifted individual who was an accomplished artist (introducing a chalk ministry to the youth at his church), singer, writer/author, photographer, computer guru and award-winning journalist. In 1970, Ed took a job as editor (and later, senior editor) at Christianity Today magazine which required a move across the country. He settled his family in Annandale, VA. During the 1980s, Ed worked for Billy Graham, covering all of the evangelist’s preaching visits in the former communist-ruled countries of Europe as well as in China. He also headed the Amsterdam 83 and Amsterdam 86 evangelists and church leaders conferences. Ed joined WORLD magazine in the 1990s where he took on a more investigative journalist type role and wrote the obituaries for the year in review. His last and latest feature was Billy Graham’s obituary posted on February 21, 2018. A world traveler, Ed’s journalistic travels took him to 69 countries for first-hand coverage of the contemporary religious scene for both print and broadcast media. An author, Ed penned The Jesus Movement in America, chronicling the beginning of the Jesus Movement. At the heart of it, he was deeply involved with the “Jesus People” in the late 1960s/early 1970s. For his coverage, Time Magazine called him the “historian of the movement”. Ed has several more books to his credit as well as hundreds and hundreds of news articles he wrote for a number of magazines and newspapers (including The Saturday Evening Post, San Francisco Chronicle and The Washington Post). While Ed was always looking for a story, his best one was actually never written. The story was one of devotion, love and commitment. In 1997, Ed’s wife, Rose, was diagnosed with Progressive Supranuclear Palsy (PSP), an incurable neurological disease that necessitated a move to Ashburn, VA in 2004 to be closer to family. Ed lovingly and without complaint, cared for Rose over the next eleven years until her death in 2008. In so doing, he became the worldwide moderator for a PSP forum, encouraging and visiting numerous families dealing with the disease. Ed was predeceased by his wife, Rose, of 56 years and a brother, Richard “Dick” Plowman. Left to cherish his memory are his children: twins Gili of Naples, FL and Gary, Beth (Bob) and Philip (Elana), all of Ashburn, four grandchildren: Alex of Manassas, VA, Aaron of Norfolk, VA, Jessica and Andrew of Ashburn, four siblings: Janet, Doris, Millie, and Bob, a host of nieces and nephews and partner/friend for 8 years, Jean of Ashburn. A memorial service will be held on Saturday, January 12th at 2:00 pm at Cornerstone Chapel, 650 Battlefield Pkwy, Leesburg, VA 20175 Pastor Mike Emerson will be officiating. In lieu of flowers, a donation can be made in Rev. Plowman’s memory to CurePSP at www.psp.org or by mail: CurePSP, 1216 Broadway, 2nd Floor, New York, NY 10001

The family of Edward Earl Plowman Jr. created this Life Tributes page to make it easy to share your memories.

Send flowers to the Plowman family.