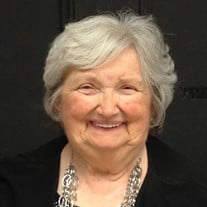 Elaine Walker May 8, 1938 – June 1, 2020 Elaine Delores Painter Walker of Lovettsville, Virginia passed peacefully into eternal life on June 1, 2020 at Inova Loudoun Hospital in Leesburg, Virginia. Born in Lovettsville on May 8, 1938, she was the daughter of William and Helen Painter. Elaine graduated from Loudoun County High School in 1956. After graduation, she worked for the government for several years. She met the love of her life, Clifton Walker, in 1958 and they were married in 1959. They settled in Lovettsville and were married for 58 years. Elaine worked as a secretary for the Loudoun County School System for 15 years, her first year at Loudoun Valley High School, then 14 years at Blue Ridge Middle School. She loved her work and all the wonderful friends she made and kept throughout her life. Elaine was one of the most social people in the world. She loved talking on the phone, going out to see people and getting visitors at home. There was never an errand run or dinner out that did not include running into at least one person she knew. Elaine and Cliff both set a wonderful example their whole lives about the importance of giving back to your community. They made such a difference in so many ways and touched so many lives. Elaine is best known for her 22 years as Mayor of Lovettsville, but her service to community started decades before. For 27 years she was a past member and past Worthy Matron of the Order of the Eastern Star. Over the decades she was a member and on the Board of Trustees of the Lovettsville Union Cemetery, was a member of the Lovettsville Historical Society & Museum, the Lovettsville Alumni Association, the Lovettsville Community Park Committee, the Loudoun Health Council (focusing on the Cornwall ER), the Loudoun Economic Development Commission, the Loudoun Main Street Program, the Potomac Society (founded by Mary Waters) and the Blue Ridge Middle School Retirees. She was also a Salvation Army Honorary Board Member, a Lovettsville Fire & Rescue Company lifetime member, Chair and Vice Chair of the Coalition of Loudoun Towns and was the proud recipient of the 2005 Loudoun Times Mirror Citizen of the Year award. She served on the Lovettsville Town Council from 1980-1990 and served as Mayor of Lovettsville from 1990-2012. At her retirement, after 22 years, she was recognized as the longest serving Mayor in Loudoun’s history by the Board of Supervisors and her fellow Loudoun Mayors, by the Town of Lovettsville for her years of dedicated service, by Inova Loudoun for her advocacy for quality healthcare for Lovettsville and Loudoun County and many other honors that she was also humbled and grateful to have received. Elaine’s passion was seeing Lovettsville grow in a responsible manner. During her time as Mayor she was proud to have been involved in a wide variety of town projects. Among them were the town center projects, the water and sewer plant, a Loudoun park in town, community policing, the pedestrian and bike path, the retirement community and the “Welcome to Lovettsville” sign. One of her proudest accomplishments was starting Lovettsville’s Oktoberfest 27 years ago. It has grown enormously over the years and in 2018 won international acclaim as one of the best Oktoberfest celebrations in the world. She remained an active participant throughout the years and was very proud of the recognition it brought to the town. In 2013, the Town of Lovettsville dedicated the Walker Pavilion in her honor. She was completely surprised by this at her retirement celebration and was incredibly grateful the next year at the dedication. Her vision of a place where people could enjoy a concert, get a soda or ice cream and come together as a community had become a reality. She enjoyed every event there to the fullest. This is where her family hopes to have her Celebration of Life service later this year. She will be smiling down on us all. Elaine is remembered for her determination and incredibly strong will, her warm and welcoming smile and twinkling blue eyes. Elaine was a force of nature. She loved fiercely and held her family and friends close to her. She invited everyone she met to please come visit her and to see Lovettsville. She loved the town she was born in and worked her entire life to make it better. Lovettsville was her life and she was so proud of what it became. Her dedication to the community was unparalleled. She truly made this world a better place. She was special and will be sorely missed. In addition to her parents, she was predeceased by her husband Clifton Walker. She is survived by her daughters Debbie, Linda and Carol, her grandson Brandon and many wonderful nieces and nephews, great nieces and nephews, and great-great nieces and nephews. A private burial was held at Lovettsville Union Cemetery where she was laid to rest next to her beloved Cliff. In lieu of flowers, the family has requested that memorial contributions may be made to the Lovettsville Historical Society & Museum at www.lovettsvillehistoricalsociety.org or PO Box 5, Lovettsville, VA 20180.

The family of Elaine Dolores Walker created this Life Tributes page to make it easy to share your memories.

Send flowers to the Walker family.