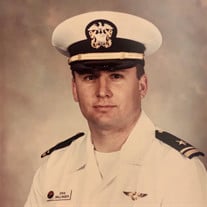 Erik Louis “Balls” Ballinger, 57, of Leesburg, Virginia passed away from complications of cancer Thursday, December 26, 2019, at home with his family in Leesburg, Virginia. He was the husband of Christina Ballinger, and they shared 30 years of marriage together. Born November 26, 1962 in Los Angeles, California, he was the son of the late Richard Ballinger and the late Jewell Gramig Ballinger. He received a Bachelor of Arts in Mathematics from the University of California – Los Angeles in 1987. He then pursued what had always been his dream, flying EA6B Prowlers and F/A 18 Hornets in the United States Navy. In his 10 years of service, he was awarded numerous medals and commendations, with over 300 aircraft carrier landings. After flying for United Airlines, and working for Alliant Tech Systems (ATK), he received a Masters in Business Administration from George Washington University. At the time of his passing, he was co-founder and managing partner of Millsapps, Ballinger, & Associates. Erik enjoyed activities he could share with his wife and children, including coaching numerous sports teams, riding motorcycles, and spending nights playing board games. He was excited and eager to see his sons Zack, Josh, and Alex graduate from medical school, college, and high school, respectively, in the coming years. He will be remembered for his deep affection, loyalty, and care for his wife and children, and for his infectious sense of humor. Erik is survived by his loving wife, Christina Bird Ballinger, sons, Zachary Ballinger, Joshua Ballinger and Alexander Ballinger, and brothers, Ben Ballinger, Kevin Ballinger, and Nick Ballinger. A memorial service will be held at 12:00 PM on Friday, January 3rd at Saint John the Apostle Catholic Church located at 101 Oakcrest Manor, Leesburg, Virginia 20176. He will be interred at a later date at Arlington National Cemetery. In lieu of flowers, a memorial donation in Erik’s name may be made to the American Cancer Society at http://main.acsevents.org/goto/erikballinger

Erik Louis &#8220;Balls&#8221; Ballinger, 57, of Leesburg, Virginia passed away from complications of cancer Thursday, December 26, 2019, at home with his family in Leesburg, Virginia. He was the husband of Christina Ballinger, and they shared... View Obituary & Service Information

The family of Erik L. Ballinger created this Life Tributes page to make it easy to share your memories.