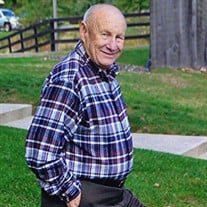 Ernest Lloyd Spinks, Jr., 79, of Hamilton, VA, passed away peacefully on Tuesday, July 16th at Loudoun Nursing and Rehabilitation Center in Leesburg, VA after a long battle with heart disease. Ernest was born February 7, 1940 in Loudoun County, VA to the late Ernest L. Spinks, Sr and Nina Virginia Holmes Spinks. He was married to Madeline Baker Spinks for 51 years as of June 22. They lived their entire married life and raise their two children in the same house in Hamilton, VA. Ernest worked as a painter, carpenter and mechanic. He was immensely proud of his children and grandchildren and was happy to share stories of them with anyone that would listen. He was a lifetime Dodge vehicle and Honda Motorcycle enthusiast and owned a few of them in his favorite color orange. Throughout his life he loved riding his motorcycles, taking drives and stopping along the way to visit with family and friends. He spent many hours tinkering with any thing with a motor. He also had a special love for his furry pets, even taking in strays from time to time. In addition to his wife, he is survived by his son, Michael Spinks and his wife Holly of Hamilton, VA; his daughter Clarissa "Christy" Hutchison and her husband James “JT” of Waterford, VA. His four grandchildren, Amanda, James and Brandon Hutchison all of Waterford, VA and Hunter Spinks of Hamilton, VA. One great grandchild, son of James, Bentley Hutchison. One sister, Shirley Langston and her partner Leo Virts of Taylorstown, VA. Visitation will be held on Thursday, July 18, 2019 from 6 to 9 pm at the Loudoun Funeral Chapel, 158 Catoctin Circle, SE, Leesburg, VA 20175. Funeral services will be held on Friday, July 19, 2019, at the funeral home at 11 am. Interment will follow in Lovettsville Union Cemetery, Lovettsville, VA. Honorary pallbearers are Bill Bosley, Jack Hutchison, Leo Virts, Dr. Ifran Idrees , Dr. Subash Bazaz and Dr. Gregory Wang. Pallbearers included James Hutchison, Brandon Hutchison, Hunter Spinks, Carl Langston, Scott Martz and Mark Hutchison. Flowers are welcome, donations can be made to the Hamilton Volunteers Fire and Rescue Squad.

The family of Ernest Lloyd Spinks Jr. created this Life Tributes page to make it easy to share your memories.

Send flowers to the Spinks family.