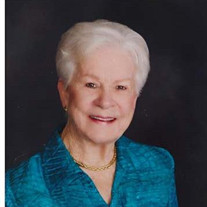 Frances B. Owens “Fran” Fran Owens passed away on May 13, 2019 at Lansdowne, VA at age 90. Fran was born on August 13, 1928 in Mayo, Quebec, Canada to Agnes Regina Gorman and James Edmund Burke. She attended Buckingham High School and Business School at St. Lawrence Academy in Buckingham, Quebec. In 1976 Fran graduated from George Mason University with a History of Art Degree. Prior to moving to the Washington, DC area in 1950, Fran worked four years in a secretarial position for the Canadian Government. While in DC she worked as secretary to the President of the American Ordnance Association for three years before leaving the work force to raise her family. In 1976, Fran accepted employment at the Woodburn Center for Community Mental Health, a Fairfax County Government agency, and retired in 1992. After retiring, she spent the next 12 years doing volunteer work-member and President of the Woodburn Center Advisory Board and subsequently was a member and President of the Woodburn Foundation, a non-profit organization providing an array of services to the mentally disabled in northern Virginia. Fran and her husband Jack (predeceased 2013) moved to Leisure World of Virginia in 2001 where they enjoyed the remaining years of retirement. Fran Owens is survived by her son John F. Owens III, his wife Susan, and grandsons Michael and Christopher of Fairfax Station, VA and son Stephen M. Owens, his wife Georganne, and grandchildren Laurie and Scott of Ashburn, VA. A third son David William predeceased. Other survivors include two nieces and three nephews of Ottawa, Canada. Friends may call on Friday, May 17, 2019 from 10-11am at Loudoun Funeral Chapel 158 Catoctin Circle, SE, Leesburg, VA 20175 where a service will be held at 11:00am. Fran’s remains will be in placed in the Columbarium at Arlington National Cemetery at a later date. In lieu of flowers, memorial contributions may be made to the charity of your choice. Please share online condolences with the family at www.loudounfuneralchapel.com

The family of Frances B. Owens created this Life Tributes page to make it easy to share your memories.

Send flowers to the Owens family.