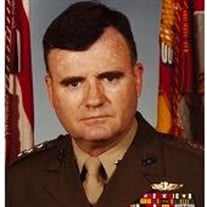 Lieutenant General Bernard E. “Mick” Trainor U.S. Marine Corp (Retired), a highly decorated veteran of the Korean Conflict and the Vietnam War, passed away surrounded by his loving family at the Falcons Landing military retirement community in Sterling, Virginia on Saturday June 2, 2018. Born to Joseph and Ann Trainor of the Bronx, NY, he was predeceased by an older brother, Joseph, a retired Naval Reserve Captain. General Trainor enlisted in the Marines at the end of World War II and was subsequently selected for officer training under the NROTC. He attended the College of the Holy Cross, receiving his bachelor’s degree and commission as a 2nd Lt in the Marines in 1951. This was immediately followed by assignment as a rifle platoon leader in the second winter of the Korean War. He also had combat commands on two tours of duty in the Vietnam War. General Trainor was a graduate of the Marine Corps Command and Staff College and the Air War College where he was awarded the Anderson Memorial award for politico-military thought. He received a Master’s Degree in history and did other graduate work at the University of Colorado in 1963. His Marine service combined the attributes of the warrior and scholar in equal measure. As a general officer he was noted for his advanced thinking and was a key player in the overhaul of Marine recruiting and recruit training procedures after the end of the Vietnam War. He played a significant role in the transition to the post-war all volunteer force, and was an influential thinker in revision of professional military education. His many articles in military journals are still standard reading. General Trainor spent the last five years of his career dealing with national and international issues for the Joint Chiefs of Staff as a deputy to the Commandant of the Marine Corps. He retired in June 1985. After retirement he joined The New York Times as its military correspondent. In 1990 he left the Times to become a lecturer and director of the National Security Program at Harvard’s Kennedy School of Government. He also retained his journalistic affiliation as a columnist of the Times News Service and became NBCTV’s military analyst. General Trainor left Harvard in 1996 and accepted a fellowship at the Council of Foreign Relations. General Trainor was the co-author, with Michael Gordon, of The Generals’ War, the acclaimed analysis of the Gulf War published in 1995; Cobra II, the 2006 bestselling account of the invasion and occupation of Iraq, and The Endgame: The Struggle for Democracy in Iraq. These remain canonical accounts of the wars in Iraq. In 2008 he was awarded the Sanctae Crucis Award for Christian Leadership by the College of Holy Cross. In 2013 the American Veterans Center chose him to receive the Goodpaster Award for military thought and performance. The Foreign Policy Research Institute established the Lt. General Bernard E. Trainor USMC Veterans Fellowship in 2017. He is survived by his wife Margaret “Peggy” Trainor of Potomac Falls, VA, and by his daughters Kathleen, married to Michael O’Malley in Arlington, VA; Theresa, married to Eddie Landrum and residing in Shepherdstown, WV; Saxon (Eileen) and her husband Erich Anderson, in Los Angeles; and Claire and her husband Alex Leimone in Santa Monica, CA; and by five loving grandchildren. They, and his many friends and colleagues, remember his love of an open fire after a good hike and his love of dinner table debate; his moral gravity and his empathy and sensitivity; his intellectual seriousness and his delight in a well told joke or good performance. His was a genuinely open mind, devoid of snobbery, intellectually curious, but practical and incisive in action. He understood the value of both skepticism and faith. We will always recall his memory in the scent of a cigar, the clink of ice in a Manhattan, and the pleasures of a lively argument no one will win. General Trainor will be laid to rest with full military honors at Arlington National Cemetery at a date to be determined. A Memorial Service will be held at 2:00PM on Friday June 15 2018 at Falcons Landing Retirement Community 20522 Falcons Landing Circle, Potomac Falls, Virginia 20165 with a reception to follow. Please park at Our Lady of Hope Church (next door) 46639 Algonkian Pkwy, Sterling, VA 20165. Transportation will be provided to the service. Memorial contributions may be made to Sacred Heart School, 1248 Nelson Avenue Bronx, NY 10452.

The family of Lieutenant General Bernard E. "Mick" Trainor created this Life Tributes page to make it easy to share your memories.

Send flowers to the Trainor family.