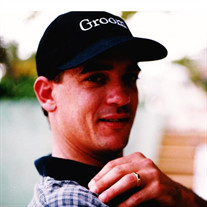 Geoffrey David Kesler of Ashburn, Virginia passed away unexpectedly on Monday, February 24, 2020. He was 52 years old. Geoff was born and raised in Fort Myers, FL. He graduated from Fort Myers High School where he created lasting friendships that remain to this day. After graduating high school, Geoffrey joined the the United States Army and was a Communication Systems Operator with the 51st Signal Battalion, VII Corps, Europe. Geoff was stationed at Krabbenloch Kaserne outside of Stuttgart, Germany. Geoffrey received several commendations while a member of the US Army. Geoffrey met his wife, Allison Brant in Stuttgart, Germany in 1991. In 1993 they both returned to Geoff's home state of Florida. They relocated to Washington, DC in 1994 and both worked for the American Red Cross. They were married in 1998 in Negril, Jamaica. Until his sudden death, Geoff and Allison had a long, loving and joy-filled marriage. After finishing his degree, Geoffrey joined the IT Department of Steptoe & Johnson, LLP in Washington, DC where he remained for for 21 years. Most recently, Geoff worked for Insight, a global IT services solution provider, where he worked in support of Digital Realty in Ashburn, VA. Geoff's life changed forever when his and Allison's daughter, Madeleine Kesler was born in June of 2004. Geoffrey was the consumate father who loved, cherished and absolutely adored his daughter! Geoff was the biggest fan of Maddie's performing arts and was so proud of her immense talent and many accomplishments in vocal, dance, and musical theater. Geoff could be found attending and volunteering during Maddie's many performances and activities with RRPA and Studio Bleu VTA. A week before his passing, Geoff and Allison chaperoned a school trip to New York City with Rock Ridge Performing Arts - a memory his family is grateful to have experienced together. Geoff is survived by his loving wife of 21 years, Allison Brant and his daughter Madeleine Kesler of Ashburn, VA; his mother Janet Kesler and sister Jill Kesler, of Fort Myers, FL; his mother-in-law, Helena Brant of Berkerley Springs, WV; his sister-in-law, Leslie Sullivan, of Champaign, IL; his nephews, Tyler Sullivan, of Chicago, IL and A1C Sean Sullivan, of Joint Base Lewis-McChord, Tacoma, WA; his Aunt, Pat Eckhardt as well as his many cousins in Anderson, IN. Geoff was preceeded in death by his father, David Kesler, of Fort Myers, FL. A Funeral Mass will be held at 11am on Saturday, March 7, 2020 at St. Theresa's Catholic Church in Ashburn, Virginia, with a reception following the mass. Interment will be at Arlington National Cemetary at a date to be determined. In lieu of flowers, Memorial contributions may be made to the Geoff Kesler Scholarship for Maddie Kesler, https://www.gofundme.com/f/geoff-kesler-scholarship-for-maddie-kesler.

The family of Geoffrey David Kesler created this Life Tributes page to make it easy to share your memories.