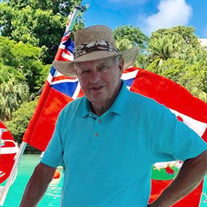 Dr. George Tipton Galyon Jr, of Wappingers Falls, New York took God’s hand and entered into Heaven after suddenly passing away on Monday, May 4, 2020. George, who was referred to by all of his friends and family as “Tip”, is survived by his loving wife of 56 blessed years, Roxanne Hamill Galyon. He is also survived by his brother, Timothy Galyon and sister-in-law, Nancy. Tip cherished his three daughters and sons-in-law: Heather and Richard Menster, Sharon and Chris Hansen, and Kristen and Kevin Doyle; and his 6 grandchildren, Shannon and Evan Rose, Colleen and Jack Doyle, Sophia Menster, and Annie Hansen. Tip was born March 4, 1939, in New York. He is the son of the late George Tipton Galyon Sr. and the late Ruth Browne Galyon. He spent most of his childhood living in Harrison, N.Y. and in Bermuda. Tip was an amazing man right out of the gates. Growing up, he worked hard holding many jobs, was a talented musician, was an accomplished athlete, and was a stellar student. He earned his Bachelor’s Degree from Lehigh University, Master’s Degree from University of Pennsylvania, and Ph.D. from M.I.T. He worked for IBM in East Fishkill and Poughkeepsie, NY as a Materials Engineer for over 40 years where he created many patents. He was very active in his community and volunteered for the Fishkill Jaycees and served on the Wappingers Central School Board of Education for many years. Next to his wife and family, his loves were tennis, model railroading, completing the New York Times crossword, reading, Volkswagen camping, going to the beach, traveling, and genealogy. He published articles and books on a variety of topics related to trains and metals. He played tennis right up until the last week of life and prided himself on playing several sets with opponents much younger than him. He was the Vice President of The Olde Newburgh Model Railroad Club and attended weekly in addition to piddling around his own personal train club in the man cave in his basement. He spent abundant hours tracing down his family history and wrote a biography on his mother’s family tree. Tip was a walking encyclopedia, giving even Google a run for its money. If you needed a question answered he had the answer within seconds and in 20 minutes you found yourself still listening to his response. Tip was an active church member of Hopewell Reformed Church and took pride in keeping the church lawns manicured. Tip was a devoted family man, and their rock, who touched everyone that crossed his path and his memory will live on forever in their hearts. The family would like to extend their gratitude for all the thoughts and prayers to all those who loved Tip. Due to the Covid Pandemic, a private ceremony is being held at Tip’s daughter’s home in Hamilton, Virginia. A celebration of life will be announced at a later time. In lieu of flowers, memorial contributions are requested to: Hopewell Reformed Church, 143 Beekman Road, Hopewell Junction, NY 12533.

Dr. George Tipton Galyon Jr, of Wappingers Falls, New York took God&#8217;s hand and entered into Heaven after suddenly passing away on Monday, May 4, 2020. George, who was referred to by all of his friends and family as &#8220;Tip&#8221;, is... View Obituary & Service Information

The family of Dr. George Tipton Galyon Jr. created this Life Tributes page to make it easy to share your memories.