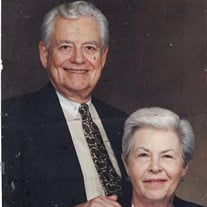 On Tuesday, January 19, 2021 George Wheeler Roark, Jr., M.D., 94, passed away from complications of Covid-19 in Reston, VA. A beloved father, grandfather, and great grandpa, he was the cherished husband of the late Barbara Ann (Weybrew) Roark, who died January 15, 2020. Barbara and George marked 70 years of marriage on February 5, 2019 with a celebration dinner surrounded by most of their family and dear friends. George was born in Wheeling, WV to Clara Elisabeth Robinson and George W. Roark Sr. As he grew up during the depression, his parents instilled in him that hard work and the importance of supporting a family was the essence of success. He graduated with honors from high school and with two generations of doctors before him, knew that his career would be in medicine. He acquired his undergraduate degree at Washington & Jefferson College in PA. He went on to medical school at the University of Pittsburgh, where he met and later married his beautiful wife, Barbara in 1949. After receiving his M.D. degree in 1950, he pursued a keen interest in the study of mental health, specializing in psychiatry at the Menninger School in Topeka, KS. In 1954 he was called up for active duty for the Korean War in the “Doctor Draft”. George applied his psychiatric training during 37 years of private practice and consulting with the CIA. He had a zest for life and enjoyed many hobbies such as tennis, golf, sailing, swimming, gardening, biking, badminton and horseshoes. He enjoyed hours of play and relaxation with family and friends at a summer home known as “Bedlam by the Beach” in Bethany Beach, DE. George received many accolades for his work with the American Psychiatric Association as their parliamentarian and was thrilled to receive a standing ovation upon his retirement in 2006. After 38 years in private practice, George and Barbara retired to their dream home he designed at the Swan Point Yacht and Country Club in Issue, MD, where they enjoyed many hours of golf, swimming, gardening, friends and bird watching. George and Barbara traveled extensively around the world, but they particularly enjoyed the Caribbean breezes in St. Martin at their timeshare. After a time, they moved from Swan Point to Heritage Hunt Golf Club in Gainesville, VA where he continued to enjoy golfing, gardening and swimming. After visiting their good friends Ralph and Mariann Blasingame several times, George and Barbara moved to the Falcons Landing Military Life Plan Community (CCRC) in Sterling, VA where he enjoyed the Bible Club, the Book Club and socializing with the many friends he made. George is predeceased by his loving wife, Barbara, and survived by his son, George (Randy) Randall (Marlene) of Silver Spring, MD, another son Robin Roark (Lyn) of Derwood, MD, his daughter Kristi Hobby (Rick) of Calabash, NC, and another daughter Kathryn (Kitty) Smith (Kevin) of Concord, MA. He is also survived by grandchildren Jessica Dascenzo (Paul), Greg Siegel (Julie), Colin and Bethany Smith, and Gillian Roark, as well as three great-grandchildren, Tyler and Ryan Dascenzo and Riley Siegel. Due to the COVID-19 pandemic, memorial arrangements will be announced at a future date. Please feel free to make a contribution in George’s memory to a charity of your choice.

On Tuesday, January 19, 2021 George Wheeler Roark, Jr., M.D., 94, passed away from complications of Covid-19 in Reston, VA. A beloved father, grandfather, and great grandpa, he was the cherished husband of the late Barbara Ann (Weybrew) Roark,... View Obituary & Service Information

The family of Dr. George W. Roark created this Life Tributes page to make it easy to share your memories.

Send flowers to the Roark family.