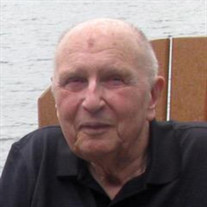 George Edward Schropp, 93, a resident of Falcons Landing Military Retirement Community, Potomac Falls, VA, passed on April 7, 2020 as a result of the COVID-19 virus. George was born October 1, 1926 in Rochester, NY, the second of five children born to George Charles Schropp and Dorothy Margaret (Callan) Schropp. He earned a bachelor’s degree from Saint Bernard’s Seminary in Rochester, NY and was accepted into the U.S. Air Force in 1947. In 1949, he joined the Aviation Cadet program and was sent to Randolph AFB in San Antonio, TX for flight training. In 1950, he was one of three cadets in his class to receive a regular commission. During his Air Force career, he served as a B-29 Superfortress radar navigation instructor at Randolph AFB, TX; a B-29 combat crew radar navigator in Okinawa, Japan; a Strategic Air Command B-47 Stratojet radar navigator at March AFB, CA, and a SAC B-52 Stratofortress radar navigator at Fairchild AFB, WA. While assigned at Glasgow AFB, MT, he was a member of a select B-52 crew. He was then given the opportunity to earn a BS degree in electrical engineering from the Air Force Institute of Technology at Wright Patterson AFB, OH. By finishing in the top three of his class, he was able to continue on to earn his MS degree in electrical engineering. Upon graduating, he was assigned to the Techniques Analysis Office of Rome Air Development Center's Surveillance and Control Division at Griffiss AFB, Rome, NY. While there, he was deployed twice to Tan Son Nhut Air Base during the Vietnam War. In 1971, he was transferred to Air Force Systems Command at Andrews AFB, MD. After 26 years of active duty, he retired in 1976. George then worked for almost 15 years as a civilian defense contractor for Computer Sciences Corporation and VSE Corporation. Upon entering into fulltime retirement, he played bridge (only a few points from being Life Master), golfed, traveled, took cruises, attended family vacations and reunions, and spoiled his grandchildren and great-grandchildren. George was preceded in death by his wife of 39 years, Shirley Ann (Mahler) Schropp, and his sisters Mary (Sister Dorothy Therese) and Dorothy Gefell (Bernie). He leaves his family to cherish his memory including long-time friend and significant other, Sherry Griffin of Alexandria, VA; his daughter Susan Modolo (Paul) of Leesburg, VA; his sons Gregory Schropp (Melissa) of Charlotte, NC; Gary Schropp of Columbia, MD; grandchildren Melissa Irwin (James) of Smithsburg, MD; Christina Modolo (fiancé Christopher Piper) of Jacksonville, NC; William, Phoebe, and Nora Schropp of Charlotte, NC, and great-grandchildren Elliot and Gwyneth Irwin of Smithsburg, MD. He is also survived by his brother Robert Schropp (Barbara) of Carlsbad, CA and sister Jean Hogan (Bernie, decd.) of Rochester, NY; as well as many nieces, nephews and cousins. A funeral liturgy at a Catholic Mass will be held at St. John the Apostle Catholic Church, 101 Oakcrest Manor Drive, Leesburg, VA on October 14, 2020 at 9:30 AM. A private Rite of Committal will follow in Arlington National Cemetery. In memory of George, donations may be made to your local fundraising effort in the fight against COVID-19 or to the Sisters of St. Joseph of Rochester, NY (https://ssjrochester.org).

The family of George Edward Schropp created this Life Tributes page to make it easy to share your memories.

Send flowers to the Schropp family.