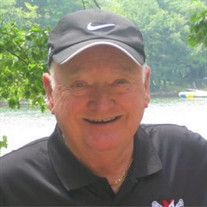 Gerald Francis Trainor (87), of Ashburn, VA, passed peacefully, surrounded by family, on January 3, 2020. “Gerry” was born in Worcester, Massachusetts, the son of Francis Trainor and Claire Trainor Marsh. He was raised in the Forest Hills neighborhood of Queens, New York and came to the Washington D.C. area in 1959 after serving as a United States Air Force Sargent during the Korean War. For 43, years he lived and raised his family in Springfield/Burke, VA before retiring to Gainesville, VA and later moving to Ashburn, VA. Gerry graduated from the University of Maryland as an electrical engineer and over the years, completed various graduate courses at George Washington and George Mason Universities. After 25 years with the Federal Aviation Administration where he earned several Letters of Commendation, he worked another 10 years as a consultant representing the engineering needs of electronic manufacturing companies which were active with the F.A.A. Gerry was known for his love of skiing, playing tennis, golf and softball. He also immensely enjoyed coaching his children (and grandchildren) on various youth basketball teams in Northern Virginia. He was a loyal parishioner of the Catholic Church and member of The Knights of Columbus organization. Gerry had endless energy and will be remembered for his sense of humor. He placed his wife, children and grandchildren at the center of his life; they were all his true pride and joy. He is survived by his wife Anne of 61 years, his daughter Kathleen Schuyler (John) of Harrisburg, PA, his son Gerald P Trainor (Jennifer) of McLean, VA, six grandchildren; Colin, Patrick and Blair Schuyler, Maclean, Gordon and Ian Trainor. He was predeceased by his parents and three sisters; Claire Dorgan, Marilyn Trainor and Carol Murphy. Mass of Christian Burial will be held on Friday January 10, 2020 at 11:00 AM at St. Theresa Catholic Church 21370 Saint Theresa Lane Ashburn, VA 20147. A visitation will be held at the church from 10:00am until the time of the Mass. Inurnment at Arlington National Cemetery will be held at a later date. In lieu of flowers, donations in Gerry’s memory may be made to: Honor Flight – Top of Virginia, PO Box 163, Middletown, VA 22645 (www.honorflight-tov.org).

Gerald Francis Trainor (87), of Ashburn, VA, passed peacefully, surrounded by family, on January 3, 2020. &#8220;Gerry&#8221; was born in Worcester, Massachusetts, the son of Francis Trainor and Claire Trainor Marsh. He was raised in the Forest... View Obituary & Service Information

The family of Gerald F. Trainor created this Life Tributes page to make it easy to share your memories.