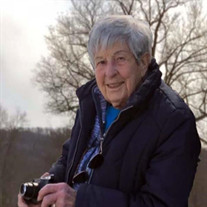 Gertrude H. Kauffman. Born February 20, 1926 in Pella, Iowa, passed away December 29, 2020 in Leesburg, Virginia. Gertie was the seventh of eight children of Lucas and Effie (Brouwer) VanOoyen. She grew up in Oskaloosa, Iowa and moved to Mechanicsburg, Pennsylvania in 1946 to marry her sweetheart, Robert M. Kauffman, when he was discharged from the US Navy at the end of WWII. Gertie was happiest when she was outdoors, working in her gardens and watching the birds and other critters who came to her well-stocked feeders. She was a friend to all cats and adopted many strays over the years, taking them into her home and her heart. Her beautiful flower gardens were admired by all of her neighbors. Gertie gave her life to cheerfully helping others, whether it was her kids’ Boy Scout and Girl Scout troops or at the church. Trindle Spring Lutheran Church was the center of her life for almost 75 years. She organized and led many kitchen activities, including the annual pie sale, and was known for her coconut cream pies. She loved to bake and would bestow the bounty of her kitchen on her family, friends, neighbors and fellow congregants. She was also a founding member of the church’s charity quilting group, and helped sew hundreds of quilts every year, which were donated to Lutheran World Relief and helped those in need all over the world and in her own community. Gertie passed on her love of quilting to her daughter Barbara, who she taught to sew as a small girl. The two of them spent many happy hours sewing together. Gertie finished a quilt top the day before she passed away. Gertie also volunteered for over 30 years as a cook for Mechanicsburg Area Meals on Wheels, always one of the first to arrive and among the last to leave. When she finally retired in 2018, she was their oldest cook. She was an example to everyone who knew her, always with a smile and a helping hand. She leaves behind many friends whose lives she has touched. Her passing will take a bit of sunshine out of their lives and the lives of her children, grandchildren, and great-grandchildren. Gertie is survived by her children Robert (Deborah Datte) and Barbara (Thomas Dill), her granddaughters LeighAnne Keilani (Zeid) and Annie Gant (Brian) and great-grandsons Laith, Zane, James and Michael. Her life was a blessing and a joy to all of us, and her passing has left a hole in our lives. Cremation has taken place and she will be buried in Trindle Spring Cemetery in Mechanicsburg. A celebration of her life will take place at a later date. Although she loved flowers, she would be honored if donations were made to Trindle Spring Lutheran Church and Mechanicsburg Area Meals on Wheels in her memory.

Gertrude H. Kauffman. Born February 20, 1926 in Pella, Iowa, passed away December 29, 2020 in Leesburg, Virginia. Gertie was the seventh of eight children of Lucas and Effie (Brouwer) VanOoyen. She grew up in Oskaloosa, Iowa and moved to Mechanicsburg,... View Obituary & Service Information

The family of Gertrude H. Kauffman created this Life Tributes page to make it easy to share your memories.

Send flowers to the Kauffman family.