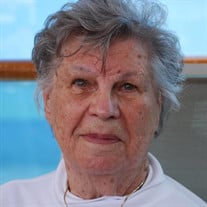 Gloria Carole Ryan, the Grand Matriarch of a large clan, passed peacefully on May 17, 2020 in Ashburn, VA. She was born in Denver on July 10, 1923 to Paul Carl Hansen and Lillian Orell (Lear) Hansen, and was the widow of James William Ryan. She married the young lieutenant from New Hampshire in a nuptial Mass at Immaculate Conception Cathedral in Denver. Gloria was then in nurses' training at St Joseph's Catholic Hospital. After the war ended and their eldest was born the couple moved across country so James could complete his education at Catholic University in DC. When he earned his Electrical Engineering degree in 1951, the family had grown to 4 children. During the next 12 years, they lived in Maryland, Florida and Pennsylvania and added 4 more children. A naturalist and forager, Gloria prepared many meals from her excursions: fricassee pheasant hit by the car, wild blueberry fritters, blackberry and raspberry pies, persimmon bread, and fried fiddleheads. She collected (and made up) recipes wherever she wandered, using the kids as guinea pigs. A voracious reader, she also wrote stories of her early life and memories of her family and even wrote some poetry. She could recite long passages or entire poems til her last years. Gloria was a skilled artisan who showed her mettle in various crafts: knitting, painting, quilting, woodworking, basketweaving and pottery (even firing in her own kiln), and experimenting with different styles and glazes, like Raku. She eagerly worked on school projects with her children and as a substitute teacher. It was in Bowie, MD that she was named "Volunteer of the Year for Prince George's County Schools." Gloria was fearless in other endeavors. She hung gutters, installed wood paneling, dismantled a brick wall and used the bricks to build a hearth, laid tile, and built wooden cabinets and Shoji screens. Gloria enjoyed tennis and swimming, white water rafting with the family, and she was a formidable bridge player. There was always a spirit of adventure and that was satisfied by her husband's career opportunities and frequent moves. The family's biggest move was to Bangkok, Thailand where 6 of the children lived for 3 years, soaking up the language, the history, the culture and customs. Gloria acquired the name "Ha-Baht" by a monk who admired her bargaining skills, and the household acquired many beautiful artifacts and furnishings due to that ability. She volunteered as a docent at Jim Thompson's house-museum, an American silk tycoon who disappeared mysteriously in the jungles of Thailand. She was fearless in her travels while in Asia, traveling to places where many would not. The Ryans returned to their Bucks County, PA home while a new home was being built in Maryland. It was in Bowie that mother and youngest son John graduated in 1981, he from high school and she from the University of Maryland, earning a B.S. in Anthropology and Education. Her main goal in life done, she and her sister Grace laughed their way through faraway lands, and she cared for Grace just as she had done for her husband. She would have made a wonderful nurse! Gloria was predeceased by her husband and her eldest son, James, and is survived by 4 daughters, Carole Hasson of Liberty, SC, Joan Hopkins (Paul) of Langhorne, PA, Susan Palmer (Charles) of Langhorne, PA, Mary Ryan of Brandywine, MD and 3 sons Paul Ryan (Laura) of Spokane, WA, Peter Ryan (Janet) of Sparta, NJ and John Ryan of Potomac Falls, VA. She is also survived by 20 grandchildren, 17 great grandchildren, and 12 great great grandchildren. Internment will be at Arlington National Cemetery where she will be at rest next to her husband James.

Gloria Carole Ryan, the Grand Matriarch of a large clan, passed peacefully on May 17, 2020 in Ashburn, VA. She was born in Denver on July 10, 1923 to Paul Carl Hansen and Lillian Orell (Lear) Hansen, and was the widow of James William Ryan. She... View Obituary & Service Information

The family of Gloria Carole Ryan created this Life Tributes page to make it easy to share your memories.

Send flowers to the Ryan family.