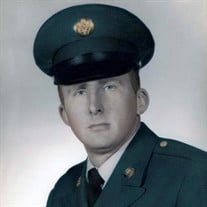 Godfrey Jerome Wenner was born in Taylorstown, Virginia on January 20, 1942. He died peacefully at his home, September 27, 2019. Godfrey was the first born son of Glendon Lensworth Wenner and Lucille Captola Coates. Predeceasing him are his parents and his brother Gary Lance. Also predeceasing him is his step son, Ernie Mohler. Godfrey is survived by the “love of his life” and wife, Kaye Frances ( Mohler), with whom he shared 53 years. Also surviving him are his step children: Tommy and Linda Mohler, and Brenda Machintosh; 8 step-grandchildren, and 12 great grandchildren; two sisters, Mary Martha Rude and Marion Wenner Anderson( Ric Neiman). He is also survived by 5 nephews; David Rude, Chris and Glen Henkle, Robert and Michael Wenner. Special mention goes to Heather Mohler, a step granddaughter, who has been there for Godfrey and Frances as the effects of aging set in. Godfrey was drafted into the Army at age 20. Vietnam was his first tour of duty. He was not in battle long before he saw the majority of his comrades fall. Being severely wounded himself, he was sent back to the states for medical treatment at Walter Reed Hospital. He was treated for over a year. He was awarded the Purple Heart and honorably discharged with 100% disability, forever a changed man. Godfrey and Frances lived a simple life, both loving the outdoors, they spent their time hunting, fishing and trapping. Godfrey was very knowledgeable, skillful and maybe even a little lucky in his outdoor pursuits. His “buddies” could fish the same spot and catch nothing, while Godfrey was snagging them. Godfrey and Frances pulled many deer from the woods with help, creating an abundance of stories to tell. As Godfrey became older and could not actively participate, he spent hours watching the Sports channels on TV, but he would forever miss the woods and the “chase” of his beagles. He loved his morning chats with his friends. Although he was an avid sportsman, he was also a man with a “tender” heart, a fact probably known only by those who knew and loved him best. He and Frances lost their beloved beagle, Snoopy, only 8 days before he himself passed. Godfrey will be missed by all who loved him. There will be a memorial service at Mt. Pleasant United Methodist Church, 13266 Taylorstown Rd., Taylorstown, Va. on Saturday, October 12, 2019 at 11:00am and a reception will follow the service. The family asks, in lieu of flowers, donations be made to the church. Please share online condolences with the family at www.loudounfuneralchapel.com

Godfrey Jerome Wenner was born in Taylorstown, Virginia on January 20, 1942. He died peacefully at his home, September 27, 2019. Godfrey was the first born son of Glendon Lensworth Wenner and Lucille Captola Coates. Predeceasing him are his... View Obituary & Service Information

The family of Godfrey Jerome Wenner created this Life Tributes page to make it easy to share your memories.

Godfrey Jerome Wenner was born in Taylorstown, Virginia on January...

Send flowers to the Wenner family.