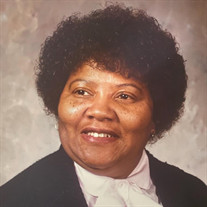 Our beloved Grace Delores Jackson, 90, of Leesburg, VA was called home to be with our Lord on Monday March 7, 2022 at Reston Hospital. She was born on April 30, 1931, at Freedman’s Hospital in Washington, D.C. to the late Nathaniel and Winnie (Robinson) Coleman. Grace was raised by her foster parents, the late Lee and Janie Redwood. Grace worked as a nurse’s aide at Loudoun Hospital for many years, as well as taking on the role as a Support Counselor with community action services. She was a devoted Christian starting out as a member of Providence Baptist Church. She later became a member of Mt. Zion United Methodist Church, and ultimately moved her membership to First Mt. Olive Baptist Church where her son-in-law Rev. Harold S. Stinger pastored. She proudly served in the Senior Choir and the Hospitality Ministry. In addition to her husband Claude Jackson, she is survived by her daughters, Antoinette Coleman Cox(Walter), Barbara Roberts Stinger (Harold), Janie Roberts Williams (James), LaJuan Roberts, Karen Roberts Gaither (Gary), and Grace Roberts; Her sons, Kelvin Roberts (Shelly), Donald Roberts, and John Roberts, as well as 38 grandchildren, 52 great grandchildren and 9 great-great grandchildren. She is also survived by her sister Sylvia Butler. Grace was proceeded in death by her daughter, Patricia Roberts Momah, her former husband, John Roberts, foster parents, Lee and Janie Redwood, parents, Nathaniel and Winnie Coleman, 6 of her grandchildren, and 2 great-grandchildren. Grace leaves behind a great legacy of over 100 descendants to date...and counting. Her time on earth was “gracefully” spent instilling and sharing the love of God with everyone who had the honor of being in her presence. Her poise, elegance, and loving nature attracted not only those who knew her, but also strangers who soon became like-family; and especially children. Her neighborhood children often paused play to share a seat on her front bench and talk to her. Anyone passing by her home would take a pit stop on their journey to stop and speak to her. Although she will be missed, her loved ones find comfort in knowing that she is now in good company for eternity; with her Lord and Saviour. The family received friends for a visitation on Friday, March, 18, 2022 from 6-8pm at First Mount Olive Baptist Church, 216 Loudoun Street, SW, Leesburg, VA 20175. Funeral Services were held on Saturday, March 19, 2022 at 11am at First Mount Olive. Memorial donations may be made in Grace’s memory to Davita Dialysis Center. Please share condolences with the family www.LoudounFuneralChapel.com

Our beloved Grace Delores Jackson, 90, of Leesburg, VA was called home to be with our Lord on Monday March 7, 2022 at Reston Hospital. She was born on April 30, 1931, at Freedman&#8217;s Hospital in Washington, D.C. to the late Nathaniel and... View Obituary & Service Information

The family of GRACE DELORES JACKSON created this Life Tributes page to make it easy to share your memories.

Our beloved Grace Delores Jackson, 90, of Leesburg, VA was called...

Send flowers to the JACKSON family.