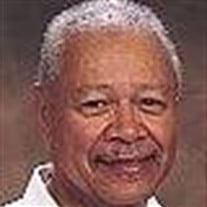 Harold Walter Grace Sr. went home to be with the Lord at age 74. Harold passed away on April 21, 2019 in Santa Rosa, California. A memorial service will be held May 18, 2019 from 2-5 PM at the Loudoun Funeral Chapel and Crematory, 158 Catoctin Cir SE, Leesburg, VA 20175. Harold was born in Birmingham, Alabama to Alfonso and Julia Grace on February 25, 1945. He graduated from Westfield High School in 1963. After graduation, he enlisted in the Marines where he served in the Vietnam War and received an honorable discharge. He worked as an Assemblyman for General Motors for 20+ years, and as an Insurance and Investment salesman with A.L Williams. He was gifted with a rich baritone singing voice but he loved teaching and preaching the Word of God. Harold gave his life to the Lord in 1972 and later went on to graduate from Living Word Bible Training Center in 2013. He served as a Deacon and a Trustee for Lansing Christian Center Church for 30+ years, and as the Associate Pastor of Living Word Family Church for 12 years. At the time of his passing he was the Senior Pastor of The Master's House Christian Church in Santa Rosa, California. Harold is survived by his loving wife of 45 years, Sandra (Haney), of Santa Rosa, CA. His children Harold Grace Jr, Kahlilah Baltimore of Sterling, VA, Charlene (Robert) Shelton of Leesburg, VA and Deniene (David) Jones of Sterling, VA. His grandchildren Cameron (Alaina) Atwood, Jerrika Ellinger-Grace, Alyssa Ryan, Tavia Blocker, Jaylon Grace, Cheyenne Baltimore, Zolan Jackson, Marlin Shelton, Shawn Grace and 6 great-grandchildren. His sister Patricia Durr of Birmingham, AL. He is preceded in death by his parents, Alfonso Sr and Julia Grace. His brothers Clarence Jones, Alfonso Grace Jr and Carl Grace Sr. Memorial cards and well wishes may be made to his wife Sandra Grace, 43098 Northlake Blvd, Leesburg, VA 20176. The family wishes to extend their gratitude to family and friends for all acts of love and well wishes during this difficult time.

Harold Walter Grace Sr. went home to be with the Lord at age 74. Harold passed away on April 21, 2019 in Santa Rosa, California. A memorial service will be held May 18, 2019 from 2-5 PM at the Loudoun Funeral Chapel and Crematory, 158 Catoctin... View Obituary & Service Information

The family of Harold Walter Grace Sr created this Life Tributes page to make it easy to share your memories.

Harold Walter Grace Sr. went home to be with the Lord at age...

Send flowers to the Grace family.