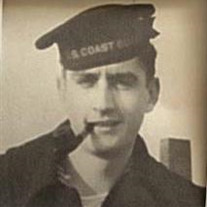 Harry Joseph Godfrey Jr., 97, of Leesburg, VA passed away peacefully on January 9, 2019 from double pneumonia. He was born October 12, 1921 in the Bronx, NY. He was the son of the late Harry Godfrey Sr. and the late Clara Pane Godfrey. Harry was the husband of the late Elizabeth (Libby) Rust Godfrey, who predeceased him in 2013. Harry was very active in the Boy Scouts (He attended the 1st Boy Scout Jamboree in 1937 in Washington D.C.) Harry took his first job in 1939 with the Bell Syndicate newspaper as a writer. An office cartoon artist created the character of a butler, presenting My Man Godfrey, a logo that became his calling card. In 1942 Harry joined The U.S. Coast Guard and was stationed on Ten Pound Island in Gloucester, Massachusetts, during World War II. It was there he met the love of his life, Libby to whom he was married for 69 years. Harry and Libby lived on Long Island for 40+ years where he worked for his Dad in New York City as a manufacturers sales representative selling everything from lamp shades to piggy banks. He commuted daily on the LI Railroad where he had a regular hearts card game with fellow commuters, to pass the time before reaching his showroom on 225 5th Avenue. Upon retirement, Harry and Libby returned to Essex /Gloucester where Libby grew up and lived there many years enjoying the beauty and memories of Cape Ann. They would call Leesburg, VA their home for the past 15 years, making yet another set of wonderful friends and activities. Harry was an active member of the Society of American Magicians. He entertained various groups from the Lions Clubs to the Boy Scouts. He even performed in his 80’s for the residents where he lived at Lansdowne Woods, Leesburg, Virginia. He loved life! He was a talented musician who played the clarinet, saxophone, piano, violin and harmonica. He was the ultimate New York Yankee fan, played duplicate bridge twice a week, loved cribbage, golf (Candlewood GC in Ipswich), mahjong, bowling, fishing, shooting pool and swimming in the ocean of Jones Beach. Harry and Libby loved to travel, especially to Europe and Hawaii. Harry will be remembered as a true gentleman, a kind and honorable man, friendly to all he met. He leaves his family to cherish his memory including his brother Ralph Godfrey of Charlotte, NC, his son Harry Joseph Godfrey III and his wife Kathleen of Palm Springs, CA. Daughter Susan Rust Drosdzal and her husband Robert of Leesburg, VA. Grand children Abby Crocker, Scott Godfrey, Sarah Rodriguez and Chris Godfrey, great grandchildren Sienna Crocker and Grayson Crocker and Caroline Rodriguez. The family will have a Military Honors service at the family gravesite, at Spring Street Cemetery in Essex, Massachusetts this summer. Please share condolences with the family www.LoudounFuneralChapel.com

Harry Joseph Godfrey Jr., 97, of Leesburg, VA passed away peacefully on January 9, 2019 from double pneumonia. He was born October 12, 1921 in the Bronx, NY. He was the son of the late Harry Godfrey Sr. and the late Clara Pane Godfrey. Harry... View Obituary & Service Information

The family of Harry Joseph Godfrey Jr created this Life Tributes page to make it easy to share your memories.

Send flowers to the Godfrey family.